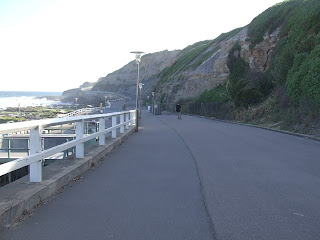 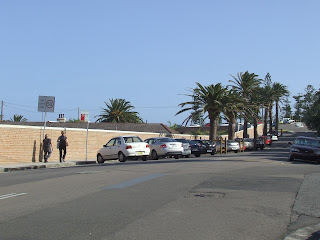 The ocean drive remains closed to traffic as it has been for an eternity. Falling rocks.  Strangly, it is good enough for cyclists and joggers and that's nice. Forget about unlimited access – it is not going to happen.
In a similar spot down the south coast, a stretch of road out over the rock platforms is very trendy.
Another project to shore up Elizabeth Street Tighes Hill was completed in record time - once it was started which had been looking doubtful.
Rome wasn't built in a day. For years, Newcomen Street was half closed-up along an old fence line that probably became unstable and required sorting out and, at long last, a new fence has been unveiled. A remnant of brick work, unearthed during a building project, part of a very old structure, is displayed on the corner. Perhaps the new bricks match up with the colonial bricks. Hope this government property is not ready for a trade off with the developers.

It just doesn't do to hear mumurings about the world's greatest democracy (yesterday comment) or revelations about what's behind all the razzamatazz. We hadn't noticed! Just imagine, all that and more is possible when we become a republic. 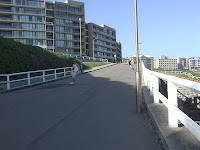