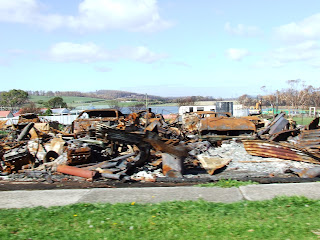 Recovery from bushfires in SE Tasmania is a prolonged process.  Many homes were ruined and acres burnt out.

Email ThisBlogThis!Share to TwitterShare to FacebookShare to Pinterest
Labels: Tasmania

Beyond Pirate Bay to the south eastern tip of Tasmania on a warm sensational cloudless calm balmy day. Now, some days later, cool autumn days have arrived instead - according to the forcasters.
To the south is a vast distance to Antarctica and it was ironic that the coast was clear and no wild southern seas were evident that day and features such as the Devils Kitchen, no less, were devoid of any wild displays apart from rumblings.
Others may take a fast speed boat on an xtreme and deafening ride around the bays and cliffs.

It is proposed that global warming has resulted in warm sea currents flowing further south than is usual to this coastline and raising the water temperature bringing fish species usually seen in northern waters and decreasing the growth of special amazing underwater 'forests' of tall sea grasses. 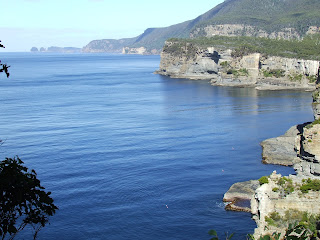 
Subantarctic Plant House (Botanical).  Ready for the chilly roaring forties?  Simple uneventful visit to subantarctic Macquarie Island  and the cry of marine life on the edge of the wild southern ocean - without leaving the botanical gardens, Hobart on the isle of Tasmania.
Posted by julia at 5:50 am No comments: 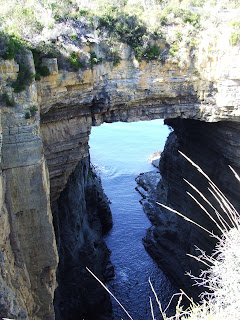 Beyond Pirate Bay Tasmania the coast line can be explored.
Posted by julia at 4:29 pm No comments: 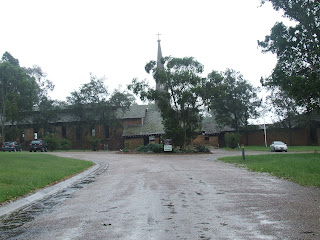 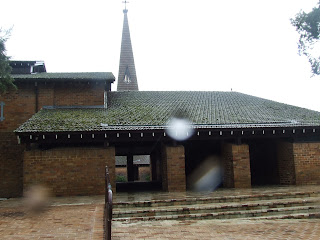 Travel up hill and down dale towards Tocal, Hunter Valley.  The countryside is pleasant. See it NOW before the days of urban sprawl. (I recommend inclusion of patches of high density, high rise in the valley)
From these photos you would never know it but this educational institution for agriculture is a splendid cluster of buildings recently recognized for heritage value.
The whole campus was designed and built as one, initially and daringly as a church project, hence the inclusion of a chapel with a tall spire of rather individual syle (largely out of view here). Certain features akin to medieval ramparts are unique that spill out to courtyards and smaller clusters to form inspiring surroundings for aspiring cow herders etc.
Posted by julia at 7:22 am 1 comment: 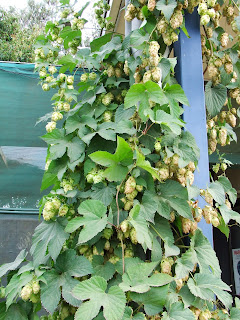 This is a hop plant that won't end up in a pale ale; it is ust being ornamental.
The plants start again each season and grow up tall to the overhead wires.
The latest hop processing plant is conventional and contrasts with the big old weatherboard unique examples. 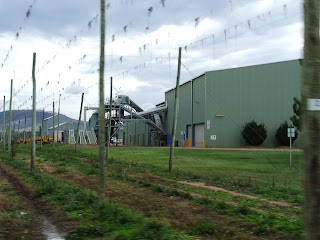 Some consulants in philanthropy are visiting and are full of 'goodness'. Do we really need them?  A better way is to first succeed in collecting taxes from the big end of town to add to the public purse for the good of all, after that,  they can dabble with their pet, fullfilling causes and offer benevolence.
Try in vain to collect a just and fair mining tax from the high flyers. No way. Taxes should be the target.
Posted by julia at 1:58 pm 2 comments: 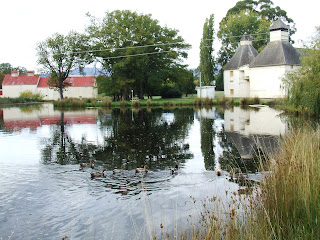 Oast houses where hops were dried before a change was made to a new factory.  A cluster of these timber buildings is in Bushy Park north west of Hobart among the hop fields. The water wheel was used and water is channelled around the farms.
Timber is used extensively in the tall and wide walls and the buildings sit sad and idle.

Terrible news from Boston first thing this morning  Along with similar from the Middle East and Pakistan where they have far greater losses, it's life on the edge from terrorist acts where the communities are awash with weapons.
Posted by julia at 1:49 pm No comments:

Harvested the week before, this is where hop plants grew on line in Tasmania.

Due to our over-use of the internet we are on speed restrictions for a while.  One forgets how it was.
The slow contrasts with high speed ADSL. Surely a total fibre optic network and the NBN is the way to go.
We don't want the half baked network proposed by the Liberal party. 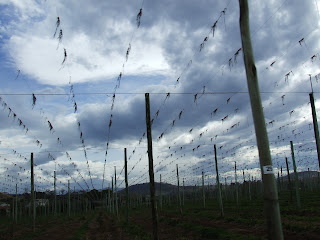 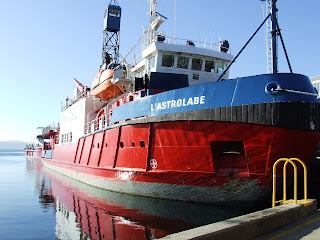 The icebreaker Astrolabe is a French research vessel. Among its duties are bring personnel and supplies to the Dumont d'Urville research station in Antarctica.[4][5][6][7][1] [2] The vessel has been making regular voyages between Hobart and the Dumont D’Urville research station for fifteen years.
The vessel has also traversed the Northeast passage.[8] The European Space Agency reports a 1992 traverse "was the first civilian expedition through the NSR since the Russian revolution." Astrolabe was escorted on her transit by Russian icebreakers.
The vessel is frequently serviced in the Tasmanian shipyard Southern Marine Shiplift in Launceston.[9] The yard's maximum ship displacement is 2150 Tonnes.[10]
Astrolabe is among the smallest research vessels working in Antarctic waters.


Below:  What's that blocking the street? The shouting and clanging? The REAL National Broadband Network (Labor infrastructure) is underway in Hobart. 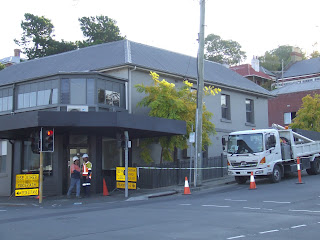 
A photo will be published again before too long. At present it could have pictured Hobart, TasMANIA.
Am visiting almost the ends of the earth and its a good place to be. And free of coal dust!
Posted by julia at 8:46 am No comments: 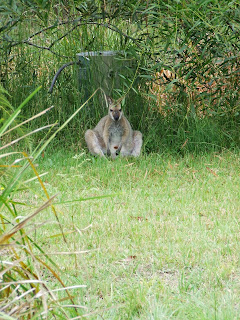 Kangaroos give birth in this position and a very tiny foetus climbs up into the pouch and latches onto a milk teat. It is probably usual for mother to be accompanied by a 'toddler' kangraroo as well who feeds off a second teat which provides a different milk formula at the same time.  Or is she searching for tick bites?
~~~~~~~~~~~~~~~~~~~~~~~~~~~~~~~~~~~~~~~~~~~~~~~~~~~~~~~~~~~~~~~~~~~~~~~
Once again we are encountering a sociopathic dictator. Gangnam Kim with the hair cut and the so called anti-Christ are sparring around.
How often has the world been held to ransome by a crazy male sociopath?  Who do they think they are?  Boy's own games.  Why can't they be put in their place? 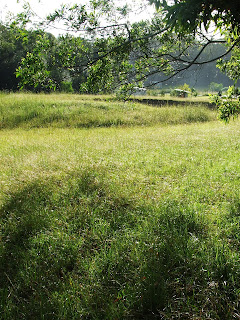 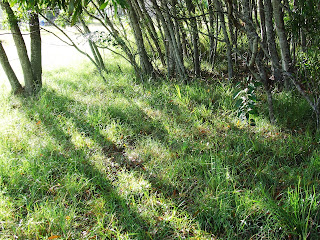 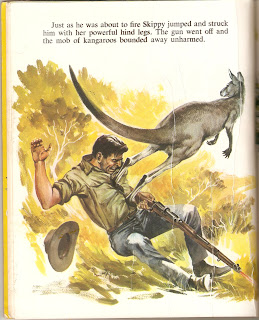 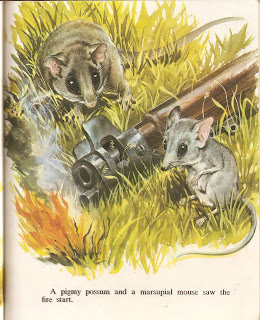 Remember the Little Golden Books?  Skippy to the Rescue is among the collection. It seems an early edition and is well illustrated (a change from Disney style) and shows all the cutest vunerable local animals.

The story has a colourful plot...the pink cockatoo screamed that he had seen a man with a gun... The man was waiting until the roos were in a clearing 'so he could fire many shots before they could get to shelter'.
Dramatically, Skippy saved the day by jumping and disarming the man. Then a bush fire got out of control. More danger then rescue.
'The firefighters found the man who had caused all the trouble - and they found the gun.  Guns are not allowed in national parks so the man was really in trouble.' Skippy watched as the man was taken away to the police station.

It is reported that some unsavoury incidents in a state park involving shooters is up before the court in rural NSW.
Now the government might say 'look how well we are policeing hunting,  there are no risks and hunting with guns will go ahead'.
We need sufficient staff to manage the parks and safely control ferrel animals without letting loose any cowboy shooters.