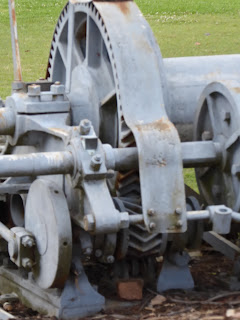 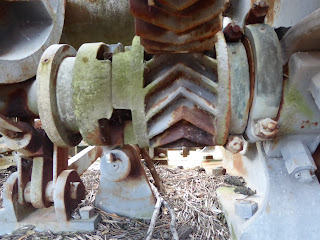 A winch at Walka Works as previously shown.
Herringbone gear, of double helical design is seen there.

The logo of the French car, Citroen, is a graphic representation of a herringbone gear.
Andre Citroen had early involvement in the manufacture and use of the gears in industry and in various early Citroen vehicles. Over time, the logo design has become more abstract.
Innovative far-out features like no other were/are usually offered to the motorist by this manufacturer.

Near Maitland, the old steam powered winch of 1910 was used in the construction Chichester Dam which holds the major supply of water hereabouts. 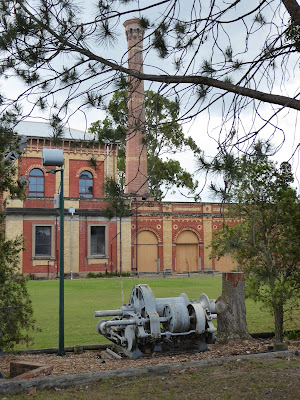 Listed historical Walka Water Works near Maitland, Hunter Valley.  Old machinery is displayed.  Otherwise, the area is used for outdoor recreation. This was the site of the original water supply.
Posted by julia at 9:33 am No comments: 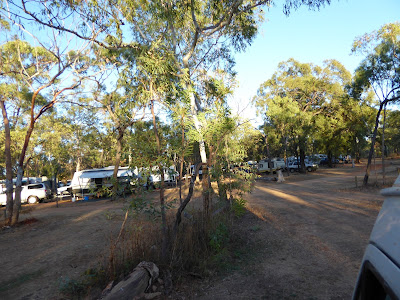 Undara, Queensland is hundreds of isolated kilometers from a cross road or "trading post" yet on each day a wave of humanity arrive, day tour, and clear out the next day - by and large.
Dry season conditions challenge, forget cute and green, but weather is warm in the middle of winter and the swimming pool is fresh.
Other groups share transport and tents in safari style. Well, "safari" is how I name it rightly or wrongly. 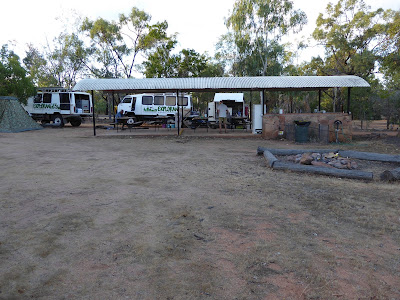 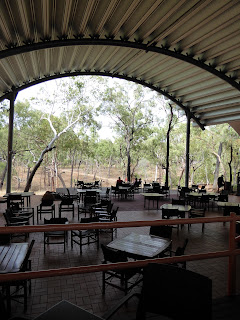 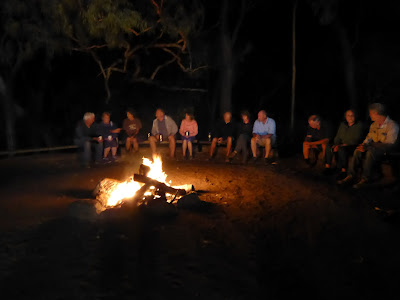 In Queensland, Undara oasis by day, by night. Yarns around the fire

Fire  We have at least, two obligations in south east Asia.
To assist with fire fighting in Sumatera, Indonesia where it is vital to preserve threatened dwindling jungle habitat. Efforts are underway.  Smoke has spread all around and is a health hazard and a hazard to the flight paths. The jungle animals and the biodiversity are victims. Think of those animals who will become extinct.  After all our fire fighters go to the USA.

A second obligation is to alleviate famine in Papua New Guinea highlands that are in drought.
El Nino is a current problem in S E Asia and Australia for a start. 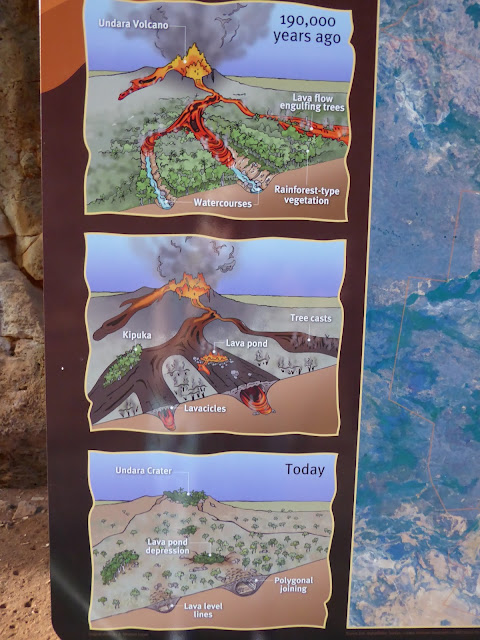 Briefing before the intrepid mob left for Undara.  Learn how the lava tubes were formed. 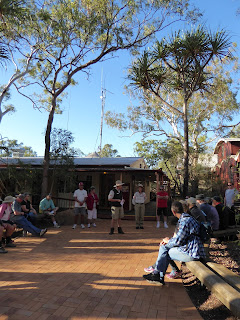 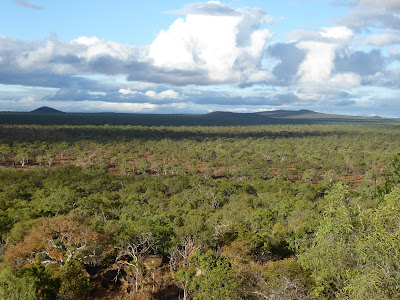 Under this open landscape are found the Undara lava tubes.  Volcanic shapes are seen in the distance and it could be said that those landforms are totally dormant - this land is ancient and mostly flat.

In contrast, Indonesia is no distance away but is a location with active volcanoes where a string of large islands surround a long string of active volcanoes. Mildly active is it.  None the less the population density breaks all records - as I understand.  A long treck in the pre-dawn to view a smoky volcano is a popular endeavour.
Two utterly cataclysmic eruptions are recorded among others.  One eruption was in the much more distant past and has become the scene of a peaceful picturesque and very deep extensive crater lake about 100ks in length. It grabs the imagination.
Posted by julia at 10:29 pm No comments: 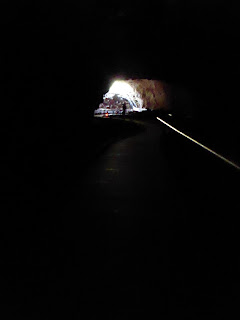 The Lava Tube tunnel went on and on,  Almost total darkness.
A little toddler in the group was fearless and enjoyed running around out towards the entrance and back again. 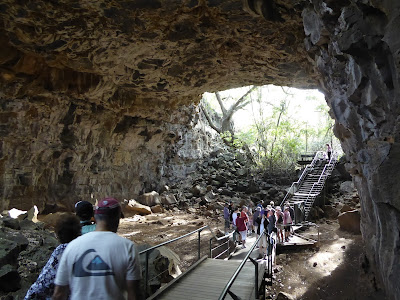 Undara.  The easy expedition, another tour is offered that is more challenging and less developed.
Posted by julia at 11:01 am No comments: 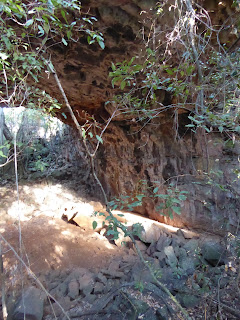 We need an international rule that a date be included in every web site.
The question is whether a site is still current. Clues and intuitions are used but....
For instance, seeking a shuttle bus timetable for a strange location, well, who can tell whether or not it is still a goer. Has such and such an airline gone out of business?  Is that review from 2002 or 2014?
Give us a break!
Posted by julia at 3:57 pm 1 comment: 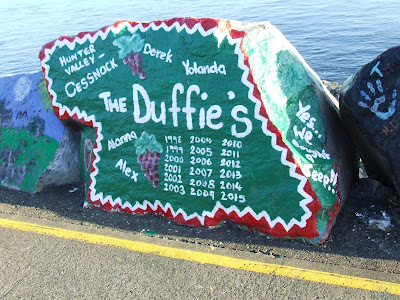 Crikey.  Australian films are pervaded by old fashioned settings.  More often than not the scene is set in a weatherboard home unchanged since the 1960s and peopled by down to earth characters to match. Cluttered, daggy.
This time warp must be well liked by viewers yet none aspire to a lifestyle such as that.  Just the opposite. Is it done to gratify nostalgia?
Genuine characters are the winners while ambitious, slick characters become losers. Again, that strays from the truth about us.
Never the less, Aussie films are darn good even when they are less than perfect.  Authenticity and simplicity about complexity win hands down.  They say Muriel's Wedding is yet not forgotten - true, it is memorable. 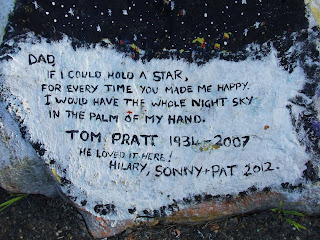 Holiday makers left us enduring messages.  Many are annual campers in the caravan park. 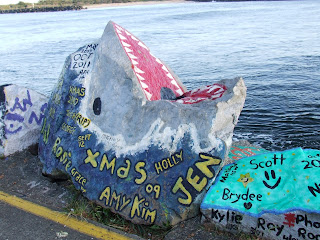 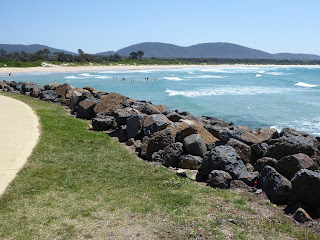 We have been hurtled into days of maximum summer temperatures.  Hope it is a passing phase. (Wonderful shot of some rocks)
Free trade agreements with the super powers are afoot.  However does it work out well? Here's to brave new markets.
And we can outdo each other over climate change effects and or policies. 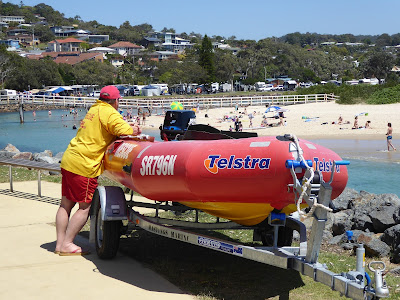 Surf Life Saver on duty.  Surfing beach is just out of view to us.  What with sharks and rips and bathing between the flags to patrol, this life saver is taking it all in his stride.
Telstra has given us some reasonable telco service lately. 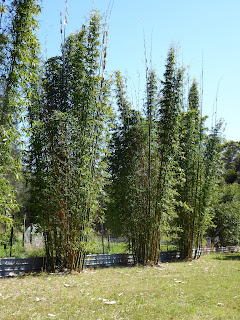 Bamboo is a very interesting, appealing and useful material yet is very alien in our bushland.
Posted by julia at 7:21 am No comments:

Email ThisBlogThis!Share to TwitterShare to FacebookShare to Pinterest
Labels: trees 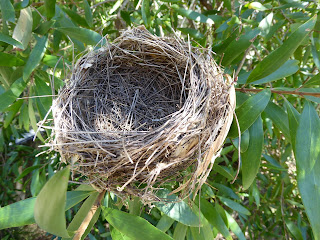 A nest had fallen out of a tree. It is not tiny.
How many hundreds of flights were taken to fetch "pine needles'", bamboo materials and gum leaves.  The woven base is fairly rigid and strong.  All the creation of a bird brain.
Posted by julia at 7:41 am No comments: