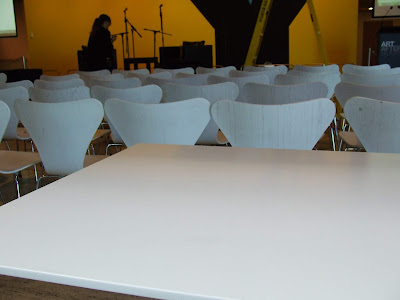 A scorching national holiday.  Celebrate!
Are there climate-change-denier politicians holed up somewhere in the worst of the record-breaking heat wave conditions?  Should do them good.
Posted by julia at 10:06 pm 1 comment:

At the bus stop, King Street - quick before it becomes redundant.  Restoration of City Hall is almost finished and it is like new again.  City council has moved out of the 'round house' which will become an hotel I believe..

Sunday church-going sure has its ups and downs.  Today was notable for the splendid organist -accomplished, subtle variations, - good organists are a rare treat.  As well, a little child in the next seat was so lovely it brought tears to the eyes. Generations and tribes are together for a time.
Posted by julia at 8:53 pm 1 comment: 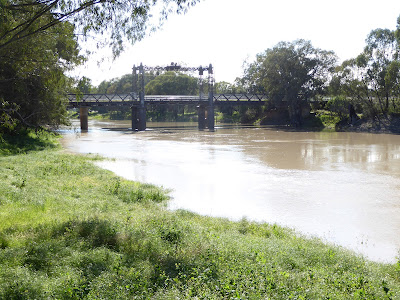 Darling River conservation and fish.   Darling River, Wilcannia, (a very small 'village' 950ks west of Newcastle), Oct 2016.  The water level was not terribly low.  Wilcannia was a large 'port' in the days of river transport.
Management of this unlikely long and grand old river is in the hands of an untold number of authorities. In reference to a local lake it was pointed out that The Department of Primary Industries Wetlands and farms project, a management plan for a lake was completed and recommended the fencing of the lake so the Lake Woytchugga conservation was undertaken by the Central Darling Shire Council.  It was funded through the Western Catchment Management authority High Conservation Value Program which is supported by the NSW and Australian Governments.

Just imagine if big time water user way upstream offered to release water into the system. What an amazing gesture!  Could they spare a drop from their water holdings the size of a harbour? (An insightful  French movie has a theme about water and manipulation) 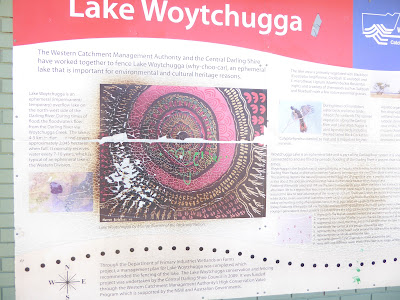 Outside of Wilcannia is Lake Woytchugga - an ephemeral lake. Perhaps the area was a scene of neglect and abuse for a time...then a couple of authorities worked together to fence the lake which has environmental and heritage features.
Lake Woytchugga is an ephemeral lake, impermanent, temporary, on the North -West side of the Darling River.  During times of flood, the flood waters from the Darling flow out via the Woytchugga Creek. The lake covers 2043 hectares when full and is typical of an ephemeral lake in the Western area of the state.
All the same, a web site says that in the past a culvert blocked the water flow to the lake and there were problems until the council removed the culvert.
It is one of the many lakes that are connected to and are filled by periodic flooding of the Darling River. usually every 7 to 10 years,  a process that is becoming rarer and rarer in modern times.
During times of inundation, water birds and other birds inhabit the wetlands.  The riparian vegetation along the Darling and Lake Woytchugga is used by many birds including the red-tailed black cockatoo to nest and is important for their survival.
Aquatic organisms, and fish observed in the wetlands include shield or tadpole shrimp, fresh water mussels, yabbies and silver perch. Trees and shrubs vegetate the land there.
Aborigines use the Paakantji language and call the Darling River Paaka and the Paakantji see themselves as belonging to the river. In good times they camped around the lake to hunt, catch and gather food, fish, birds, eggs, and plants.  Now, the younger generation is taught these skills and see the work of their ancestors. The land is a place of burials and of ancestoral spirits and serves  continuing connection to the land. Totems are another aspect.
The internet refers to other tribes and languages as connected to the lake.
The local signage conveyed the above description.

What's this?  Seen from rail interchange, the co-operative store is no more, facade unworthy.

Often local trains pull in behind a Sydney service of six or eight carriages waiting at the station.  It is not exactly convenient to be deprived of the prime position on arrival.
The Sydney trains could wait somewhere else and line up just before the time of departure. We would like Gladys to look into this.

An hour ago this black twin cab was charging along with a flat tyre or on the rim - very noisy - followed by a dozen police vehicles sirens full on.
Keep clear! - would it get out of control? would shots be fired?
The chase ended when the twin cab crossed over and stopped outside an office building and everyone soon gathered round.  The offender was taken away.
Posted by julia at 9:50 am 1 comment:

The Darling River in the far west is a scene of distress where truly vast numbers of fish have died along one reach.  Algal blooms have caused the loss of for example young breeding stock on to venerable one hundred year old Murray cod.
Even the field workers are showing total dismay.  As we all should be dismayed and question the management of the Murray Darling basin - a scene of controversy.
Demand better management of our environment.

Scene from the work Garden of Earthly Delight, two channel video, from the Middle Kingdom by Zhou Xiaou. Outlandish and fascinating, a great little collection.
White Rabbit Gallery.  Environmental aspects and ideology in the Middle Kingdom were present themes or so I believe, who knows?.

Early morning was just right before the heat wave and the hot wind set in. It was the time for action before sucumming to the air con. Forty degrees has been exceptional.
Posted by julia at 7:01 pm 1 comment: