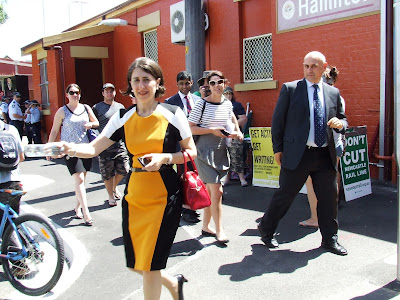 'Stralia' Day, means different things to different people. Life goes on but sometimes there's a discontinuity  - debate over the meaning of this day has been occurring and disssent has arisen. It is food for thought.
Above, our state premier once visited Hamilton Railway station while she was a minister and plans were germinating about the new interchange, privatisation and other processes and that time a minor protest was underway - which fell on deaf ears.  This week an unrelated rail strike on a critical day was averted much to the relief of the said premier no doubt.
Well, today the new bus routes and timetable round Newcastle were found to be challenging, it took three modes to make the relatively short distance to the CBD, admittedly bypassing another possibly easier 'block chain'. At one stage the bus driver took a wrong turn and following prompts from the passengers after a few attempts and a detour managed a short circuit to Broadmeadow Station - which is a bit tricky - where a connecting train was quite some time off.
A fellow traveller was taking a train to a country town four hours away and had several pieces of luggage.  On arrival the luggage service seemed unattended so after a while when staff 'appeared' she called to them from platform 2 and asked about checking in the luggage. No, that should have been done half an hour earlier and with possibly 15 minutes before departure shortly the 'porter' jumped into his 'buggy' to transport one single suitcase to meet the country service, it was not as though they were under pressure from countless travellers and might have obliged her.
Next a connecting shuttle was caught up in traffic on the foreshore by which time a lot of the holiday action was half finished. We are usually carefree as it is very rare to get caught in a traffic jam in the city.
Unpatriotic dissidents we rejected meat pie or chips and going international a Spanish paella was enjoyable during a chaotic lunch.
Afterwards, return to the interchange drew attention to the total wilderness that is Hunter Street, due to light rail construction, and how fences and detours added to the return walk in the high summer sun. The bus shuttle seemed excluded from doing a return run to the interchange, there was no flexibility that way.
Never the less, we returned buoyant.
I am guilty of wondering if there are many red neck bogans among the flag and accessory wearers although this was not overdone.  It is a problem if a person is deemed an Australian only if they are a regular looking Anglo. 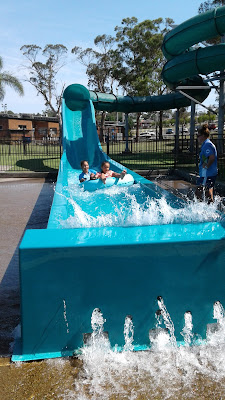 Lambton Pool in a heatwave. Very nice.
Its unheard of...Federer got angry and talked with the umpire... makes him more likable. I guess he will be in the finals this weekend.  The Australian Open at this time of the year is enough to ruffle any character no matter how steady and controlled. Not that Federer was necessarily in that category.

Morning exercise in the oasis. 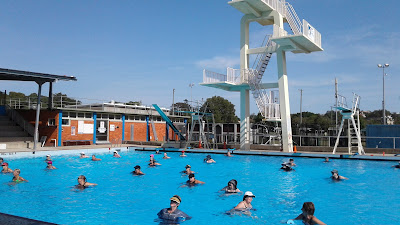 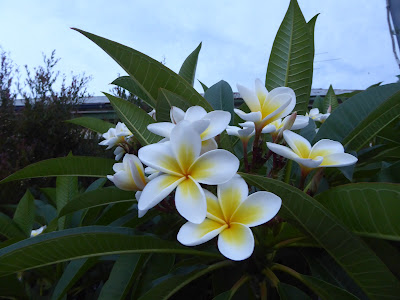 Plumeria or frangipani are at their best. Rich texture rich perfume. There are many beliefs about them in differenet cultures.  Similar beliefs are most unlikely to be found hereabouts. 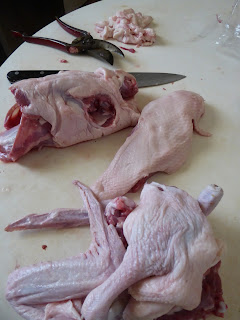 A little duck is part of the flights of fancy penned by Leuing in the Sydney Herald.  Duck is hardly a well known food around here, there are the Asian stores where a rack of bright red cooked birds hang in the window.
Ex-senator Amanda Vanstone has a polite talk show on  ABC radio and she alluded to the purchase from Woolworths of a carton of frozen ducks or maybe 2 cartons.  As a past minister to do with social security and another time immigration she was a minister with a firm hand in the genera of the unforgettable Ruddock and now, for goodness sake, Dutton   She was ‘rewarded’ with a diplomatic post in Italy.
A few months ago I spied a consignment of frozen ducks in the freezer aisles at Woolworths and somehow Vanstone influenced me to buy.  It is hard to recall ever having eaten duck until more recent times when a thoroughly enjoyable example was had at Sydney Junction Hotel in Hamilton.  Delicious served in a jus.
A re-run of Rick Stein food adventures in Vietnam had insight into the cities and heritage but he was enthusiastic about duck cooked Asian style.  I jotted down the details and probably got most of it.
It was the recipe for me.  It was deemed to need 39 hours to defrost before dividing the duck  into portions which was new ground. It is not the same as a chicken carcass and garden secateurs came into use as I hacked away on the fatty slippery bird.  The fat was significant and was trimmed, I believe it has its uses, and frying and browning released more and more fat.
A large old pressure cooker was big enough for all the pieces bathed in a fluid concoction which gradually heated and spread a wonderful aroma during the slow cooking process.  Yes, the sauce was delicious and the meat unusual.  Too late I found it was more than cooked and overcooking may have had some negative consequences. Also the recipe would seem good with chicken pieces.
It produced several meals to freeze and will be interesting later-on beyond the heavenly day of glorious abundance of duck. 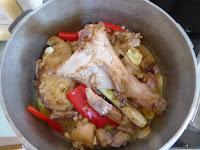 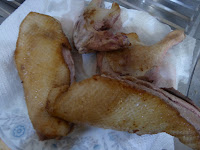 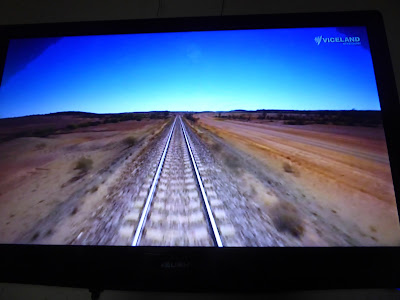 Over the entire day a train journey on The Ghan was on TV.  The program dwelt for very long periods on almost unchanging landscape from a few points on the train one after the other except aerial footage during the last sections.
Almost in silence - normal train noise was faint. Discreet informative messages in text made an occasional appearance in a nice form growing in size as the train approached and as in real life it was difficult if not impossible to read them as they 'rushed past'.
There were no obvious concessions to travelogue style even when it is presumed it was showcasing the train which crosses the continent north-south.
The minimalist unending content gave the viewer the impression of actually doing the epic journey, the passengers would have some variety of scene inside the train which takes a day a night and a day to reach its goal.  Some passengers stop off for local adventures.
The train itself is very very long with two locos and most of the journey is on flat terrain plus a few seemingly minor climbs.
It was great to be taken back to the 'red centre' and the unending nature of the country and the endless miles of driving. It is had to say whether the film would succeed in generating more passengers or just the opposite.
Shown of SBS TV. 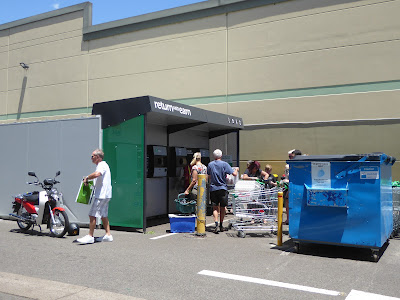 RECYCLE.....RECYCLE...........RECYCLE....Return and Earn....
A ten cent refund is offered on certain drink containers. It is a recent move after a long period when cordial bottles were returned for actual reuse as they stood.
'Everyman and his dog' was at the 'digital interface'. Bags, cartons, suitcase, or a trolley full.  One man was leaving with some bottles and he said the bin was full and a truck was on the way to renew the container-sized bin.
Drinks were popular and possible life-savers during this super-hot summer silly season.
All the same, tap water is aok it is sugar free and provides fluoride. Are bottled fluoride deficient water bottles refundable?  It is said that the drink companies will increase their prices - you win some you lose some.
Posted by julia at 6:59 pm No comments: 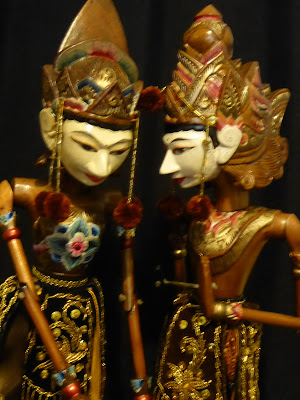 Rama and Sita.
The Ramayana (Life of Rama), an ancient Hindu epic, is a tradition in Indonesian puppet theatre. I read that the epic is part of the culture throughout S E Asia.

It was a fun interlude when we performed this epic after Christmas dinner with adaptions from Henry Lawson and the Loaded Dog (monkey) and some action set in Kakadu - so it was a bit laid back and absurd yet gripping.

Never the less, this is a tale of combat between good and evil which I was uninformed about. It is a model for relationships and for behaviour, honour, loyality, and duty, of vows and taboos for a good society long before the rule of law.  The vast theme of journey towards a kingdom and of redemption is echoed in Christian thinking.

The Wayang golek are 60cm high puppets made of wood. They are among several types of puppets including shadow puppets which are one dimensional in leather where the outlines are pierced with holes and the arms are moveable. 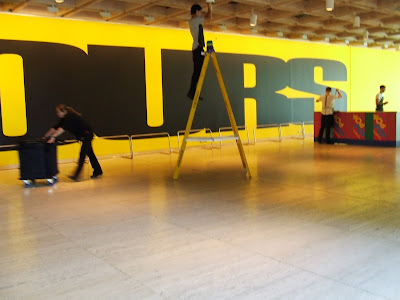 Escape from a soap opera is one way to describe release from a four bedded hospital room. A single room would be a very different experience but is it better?
Posted by julia at 1:36 pm No comments: