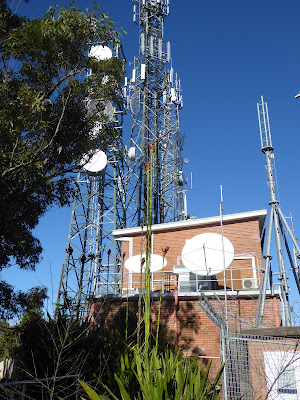 Lofty gymea lilies rival the communications towers. \
It is believed senators are looking at legislation around media, even further concentrating ownership. In return the Australian Broadcasting corporation is looked at, strangely, with the idea of more services operating around the countryside -  just the opposite direction - and pressure to reveal certain salaries.
Next, CBS will take over a TV channel and that does not raise a storm. We could do without it. And why look at salaries paid to ABC staff what about really gigantic examples in other corporations.  There is a rich reward no matter what sort of a stuff up by the executives.  Staff do their work well and others are rewarded for losing their job.
Posted by julia at 1:02 pm 1 comment: 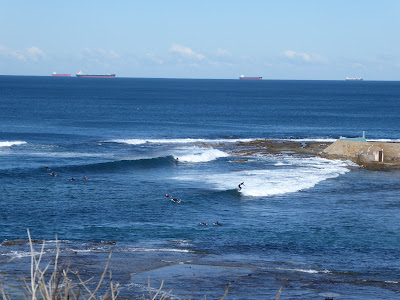 Surfing. Winter. This little surf break is between the baths and a rock platform, Newcastle.  Coal ships waiting at anchor on the horizon.  The previous long queues of ships have been discouraged and stay well out of sight or manage their timetable better and that often leaves only five or six within sight.
Posted by julia at 1:23 am 1 comment:

Email ThisBlogThis!Share to TwitterShare to FacebookShare to Pinterest
Labels: board riding, shippng 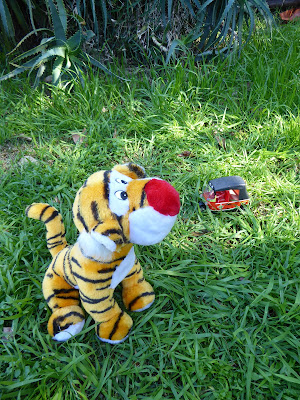 Critically endangered tigers.  See a decent clip about Sydney's Toronga Zoo. See a new tiger experience there.  You will take a simulated flight and live life-on-the-edge in beautiful Sumatra (Indonesia).  Meet real Sumatran tigers in the jungle.  Walk in a local village and market stall.
Most importantly, see about palm oil - a ubiquitous ingredient in many of our products.  Palm oil plantations all over are supplanting jungle habitat.
The jungle is vital habitat for endangered tigers, orangutans, elephants and more and regulates green house gases.
In Indonesia, prolonged wildfires and smoke pollution on a vast scale have happened, the soil, the timber and rivers all need protection and policing as well as maintaining a healthy natural environment for the people and the visitors to enjoy.  Just as we need to do the same in our own 'backyard'.
Posted by julia at 12:08 pm 5 comments: 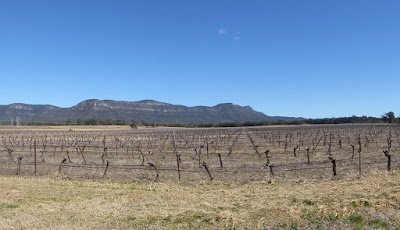 'Wine Country' is not at its best in winter. The olive trees are evergreen.  With climate change the vines will soon be sprouting new life earlier and earlier.

We are in a mini flu epidemic sad to say and many are not at their best.  We were warned and flu shots have long been available and they work - touch wood.
Posted by julia at 11:12 am 1 comment: 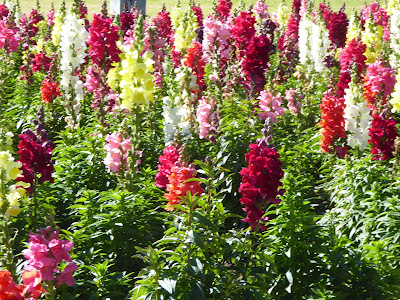 The flowers said they don't like nasty chilly windy weather.
The young child was shown a single bloom and how it opened and closed when squeezed - a snap dragon (or antirrhinum).
I said we were not allowed to pick flowers in the park but one bloom was sort of ok and there was just as much interest in stealing a forbidden flower as in the snapdragon effect.
Posted by julia at 12:42 pm 1 comment: 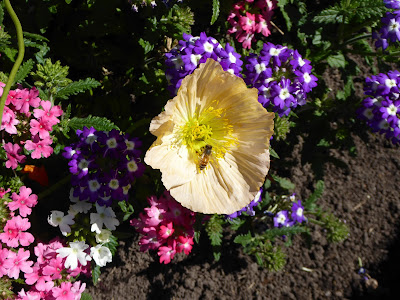 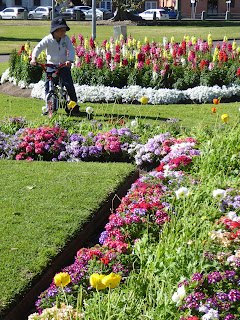 Gregson Park has a wonderful patch of colour and the insects are abuzz including indispensable bees, thankfully.  Newcastle City council is the maestro.
The sunny but extra windy weather has been hard on the poppies which are precious enough as it is because everywhere, in contrast, rugged and green have become the plants of choice (and less work).
House paint is in two forms  - white and grey, alone.  Every house conforms in the new estates, sensible, orderly, sophisticated or is it dull?
Antirrhinum, an old fashioned flower, is difficult to spell and my attempts were way off the mark and failed to come up with a lead so snapdragon was tried instead which found mobiles and processors - everything has changed -  but revealed snapdragon plant on the end of a list.
Posted by julia at 3:56 pm 1 comment: 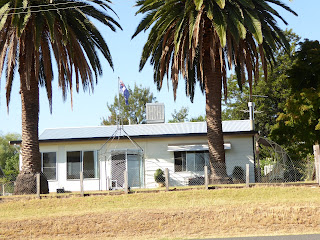 Flag pole just like the one on parliament house - on looking closely.

The question of same sex marriage is reduced to a contest when deep issues are the subject of a survey by post with advertising campaigns used to sway the 'yes' or 'no' respondents.  Significant issues via snail mail. Whatever is the government thinking...again.
We can cooperate and agree with all human rights for gays.
Hope it is reciprocated when it comes to other matters. Like enthusiasm for environmental legislation.  We could have our human rights in place yet have a troubled existence in conditions of  extreme weather.
Whatever is the government thinking going all the way with the unpredictable Trump. We will be in more trouble.  The global community needs to find a way to curb dictators.  It is absurd to be held to ransom by any extreme head of state, be it North Korea or elsewhere, a teen delinquent playing war games in a country steeped in secrecy and control, seeker of hubris in front of patriotic robots massed in absurd numbers, mass abuse.  How is it that the world community stands by?  Or meets the insanity with more insanity.  Crimes against humanity might be one way.
Posted by julia at 8:00 am 1 comment: 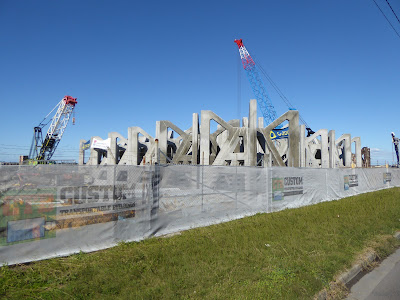 Concrete support items or legs or whatever.  At a Kooragang works.
Posted by julia at 3:57 pm 1 comment: 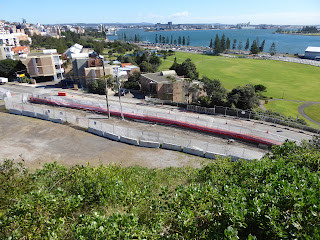 Harbour and foreshore and road works in foreground.  Some of the tall trees have been left standing.

Some years ago when many of us installed solar panels the rebate on electricity costs was reasonably good. As a move towards renewable energy, solar has not been seen in a positive 'light', there has been no rejoicing by the state, in fact, despite the load that households contribute to energy, the power companies have cut rebates and have raised energy costs.
As soon as solar made its appearance every move has supported the power companies, are they out for what they can get before change jeopardises their future.
The excellent move of taxing carbon was blamed for rising prices and against all common sense, the tax was repealed yet the prices continue to rise.
Privatisation and gold plating the electricity network must be another expense put onto the consumer.
At the very time when energy production might be sorted out with gradual change to renewals, the old ways continue to up their anti and put all the pressure on the consumer to pay up. We hear they blame gas prices but that can be got under control if we tried.  What about the costs of coal supplies. Who knows, just another excuse.
Posted by julia at 9:13 am 1 comment: 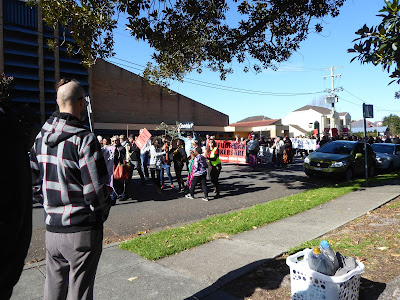 Discussion is about a downturn in wealth and low wages and fears for the next generation.  Apart from the extremes of wealth and poverty around here, superficially, we are doing all right.
Is all this trend a very gradual revolution towards global equality when the real materially poor nations grow out of poverty and meet our continuing decline in wealth at a certain mid point?  Without too much manipulation or rigging by the Western world more global equality could result.

Photo of a demonstration or march in Hamilton north in support of refugees.
Posted by julia at 8:56 am 1 comment: 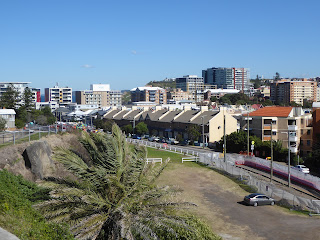 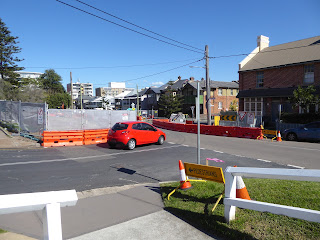 Newcastle East and a small part of the road works to build a racing car circuit.  Ridiculous?

Latest leaked transcripts of Trump and our PM put us in agreement with Trump that our deal about refugees is stupid....'shows me (Trump) to be rediculous'...'look like a dope'.  Trump has got it correct this time.
The deal made with the US to take our refugees is appalling.  Turnbull says the US is not obliged to take one person they do not want, all that is needed is to accept a very small minority as long as Trump honours the deal made with Obama.  Hence few will find refuge. The truth comes out.
The whole arrangement is shameful.  As some humanists say that after so long it is not valid to refuse to back down from never granting asylum to these boat people.
What have we got to lose? 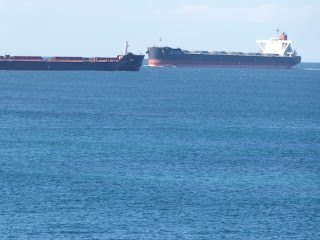 Less than an hour after the previous ship sailed another is sailing to Asia.  It is low in the water as it is full of coal.  At the same time the next ship is moving into the harbour, it is high out of the water as it is empty. Doh. Several tug boats gather nearby to see it into the port. 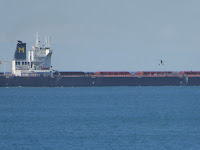 A helicopter is barely visible landing on the deck to pick up the pilot who took the ship out of the harbour.  Another pilot is already aboard the incoming ship. 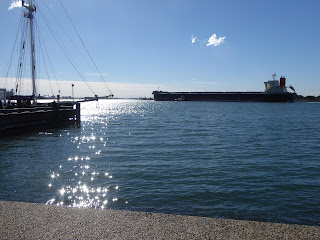 In no time, the latest ship and tugs are in the harbour and almost in the channel to the coal loading docks where a whole line of ships are filling up with loads of black fossil fuel.
Posted by julia at 9:21 pm 1 comment: 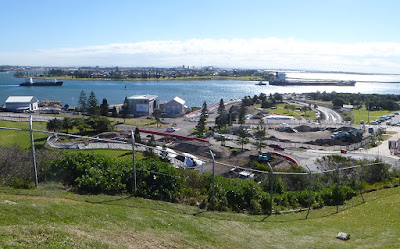 Beaut day on the water or in the air to view a city spread out before you. Climate change and  fossil fuel is implicated when we read that July was the warmest July on record.  In photo a coal ship is leaving the port followed by what is believed to be a small dredge.  The dredge makes a lot of round trips each day.
Once free of the port the ships seem to go south towards us before they soon turn north to flee to the wider world with their dark cargo of fossil fuel. Farewell. Somewhere at that point a chopper retrieves the pilot.  The port has been leased to Chinese interests.  Hard to believe.
In the foreground amid the constructions is a hairy bend on the new temporary race circuit. 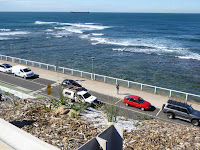 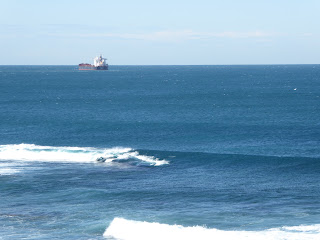