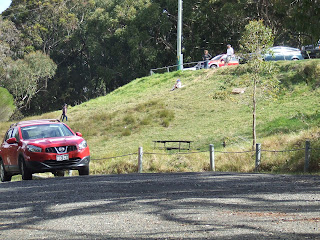 National parks and rec. Believe it or not, sliding on cardboard is against the rules yet hunting with guns may become a reality.


David Baldacci, crime writer, is 'able to deliver eloquently what the public wants'. Yes, he has a very easy style and one book begins thus. A young female investigator is taking a morning keep-fit run in the woods in outer urban Virginia and 'she took comfort in the pistol riding in the clip holster...she'd never gone anywhere without her gun'. Then....somewhere in the woods she hears a noise and takes out her pistol and waits. Eventually a child emerges from the woods.....
It's only a story and one where gun toting is so taken for granted. A hugh number of homocides are the reality. We don't want to follow suit.

A group of young Amish were observed on camera while they were in the UK on a holiday exchange. Naturally, local behaviour was alien compared to their back-to-basics anacronistic lifestyle and they hung back,  but these refreshing pleasant folk proved to be first rate with a rifle in their hands when it came hunting time. Well, hunting with guns is sort-of in keeping with self-sufficiency.
Around here, can't we build up more resistance to the culture of guns?

Please get all steamed up and voice objection to the introduction of recreational hunting in our national parks. Bob Debus in News Review, SMH, tells us about the Act (in NSW) and it's real bad news.
Real men use guns. Does the eager Shooters Party find profound and primeval well-springs in the proposed expansion of shooting throughout American national parks under the 'propagandist title of The Sportsmen's Heritage Act' due before the Senate.
Surely it's not our thing.
Posted by julia at 9:48 am

Email ThisBlogThis!Share to TwitterShare to FacebookShare to Pinterest
Labels: Parks and Wildlife.