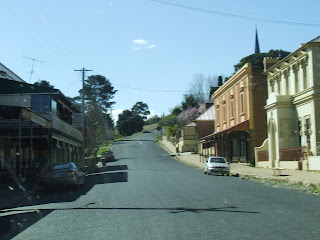 Celebrating Fifty Years - Old channel 3 or NBN TV Newcastle is our original TV operator. Somehow it has gone over to Nine network in Sydney who is trying to keep afloat in a very current bind involving Goldman Sachs and the hedge funds.
So, is NBN secure?  I believe it is the only source of local TV news in long format.

SBS TV is where anything and everything turns up to entertain us.
The re-opening of the Bolshoi Theatre was celebrated with a concert and performances of outstanding style and quality. I guess the Bolshoi is the ultimate exponent of the classics, glorious, yet trapped in the past. Is it totally devoid of edgy bolshe pop cultural influences?
During the gala, Medvedev was basking in the tsarist glory but where was Putin?
The digital stage effects showed how any fantasy is possible with new theatre technology.
The Adagio from Swan Lake was absolutely perfect yet somehow unmoving. Song artists of great character took to the stage in old fashioned concert items.
What about the live white horse and donkey on stage?  Theatre ushers in iconic uniforms danced in a fun act while a grande finale in quasi Hollywood musical or oscar style remained dignified to the end.

Love it or hate it the live debate today came from the US thanks to SBS again.  Is it a one horse race?  A difficult time to change a leader.  Obama is more a universal character in touch with the bigger picture and with a congruent ideology while Mitt is more a generic businessman.  Hopes are expressed over a return to the past, full employment etc, maybe it's not going to happen no matter what. New ways are required.
Posted by julia at 10:23 am

The US political process is insane compared to Australia. For starters, a two-year presidential campaign, starting with party primaries, voting on a Tuesday and participation by choice rather than law. It is estimated that $1 billion will be spent on the presidential race and another $4 billion on congressional races. The media makes out like bandits on all the advertising and has a deep financial interest in the keeping the contests going as long as possible and making them--especially the presidential race--look close.