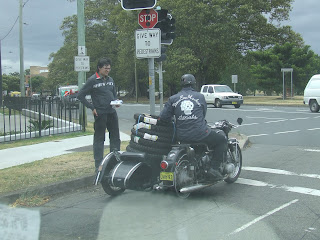 Retro messenger 'boy'.
Imagine travel round sixty years ago. Beijing or Shanghai and S E Asia before the building boom. Big things were traditionally carried on bikes. Coming to terms with another culture in its original form and without fully escorted backup and five stars was an adventure.
Julia is very old fashioned. In those times were fewer drunk, outspoken Aussie backpackers that disregard local dress codes.
No obligatory gap year devotees.  Fewer cashed up dowagers with a check list of destinations to create demand for Westernised this and that. It must have been hell in those days.

An extract barely relevant to anything is from an Australian adventurer who wrote, in 1963, about Spain. He and his wife went swimming at the Basque seaside.


'Laura's one-piece costume was well within the regulations, which are not stricly enforced at Ondaretta beach, anyway.  This being the beach favoured by the Corps Diplomatique, it would be embarrassing to have to bring indecency charges against some daughter of the French or Italian or American ambassador for being over-exposed in a two-piece.  But, diplomatically, she would not wear a bikini - any more that she would say, as a foreign playgirly in a two-piece is once supposed to have said when told she should be wearing a one-piece, 'OK. Which piece shall I take off?'

Take Me To Spain by Colin Simpson, 1963, published by Angus and Robertson, Sydney.

Email ThisBlogThis!Share to TwitterShare to FacebookShare to Pinterest
Labels: motorcycle