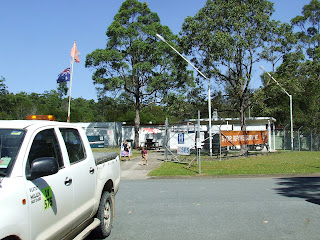 STOP REVIVE SURVIVE.  On the Pacific Highway between Port and Kempsey.  Three young travellers called in on the way to Byron and the Blues Fest and then Cairns which is several thousand ks, while they are here for a few weeks from Europe.
If its the coral reef you want to see, it is closer to the coast at points south of Cairns along with the Whitsundays which are rather appealing and not as far away as Cairns.

Telstra Mobile Broadband is working this time  probably because it is earlier in the day and is a holiday
Posted by julia at 8:43 am