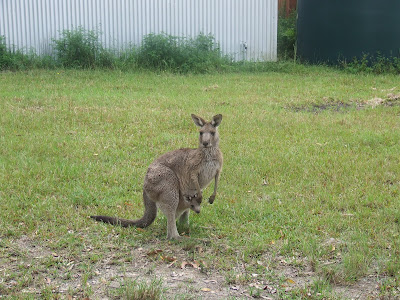 Kargaroos hop around and relax on the lawn and under trees near these houses.  Whats the difference between a roo and a wallaby?  Who knows? Wallabies are small....   ;
Crocodile Kangaroo Dundee of Central Australia is popular in the UK.  News of his activities are filtering down on ABC1.

From kangaroo to kangaroo politics and the leadership spill.  Why ever  would we contemplate a change of leader to a man who has been described as incompetent and, as someones else said, has mocked the party while the all hard yards have been done by other hard working members. The joker is laying or lying low. Was he true to his word or just lacking support?

Compare the speech of the fiesty red head to the trite words from Julie Bishop, charming as she is. Gillard can say it like it is. The leader of the opposition has to be avoided and the mute button comes in very handy.
It is something to have a slightly unconventional, less squeeky clean, slightly boring, effective leader of the government and one who can go for spunky futuristic policies.

We  must reject sucking up to Israel.  The threat of chemical warfare in Syria, got a mention but how could the big leaders swan about close to the terrible disasters in Syria and Lebanon without offering more to those countries.
Posted by julia at 9:20 am