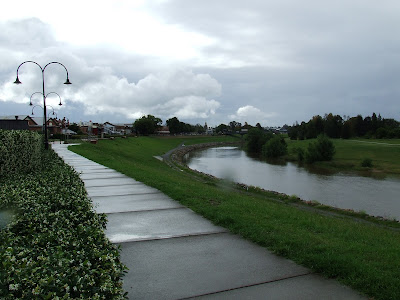 
Mr Close found the country a dense bush, covered with scrub and ancient trees, whose arched branches almost concealed the river, and whose leafy boughs were so impervious to light that to walk beneath them, even in broad daylight, was like walking in the dimness of twilight. This dense forest and bush land Mr.Close set to work to clear, ... and the result of his labours now is before us in fertile meads and peaceful habitation.

These lines refer to nearby Morpeth where the alluvial flats have been cleared of trees and scrub. Imagine the cedar trees that once grew along the river valleys. What will future generations think of our land-use here and now?
Maitland  (Newcastle etc) needs to go high rise. Naturally there is demand for new housing and towns spread everywhere, up hill and down dale, from Metford to Aberglassen and beyond, but scope exists for pockets of high density living, well planned rather than an after thought, when suburbs become too hugh to service. High density is sustainable, and while it is not the local tradition, surely state of the art, green, affordable, high rise apartments could be popularised and taken up.


Extract from Morpeth and I by A P Elkin quoting Bishop Tyrrell 1866. Mr Close took up a grant at Green Hills (or Morpeth so to speak) about 1821. The locality (including Morpeth) was known officially as Illalaung.
Posted by julia at 11:31 pm