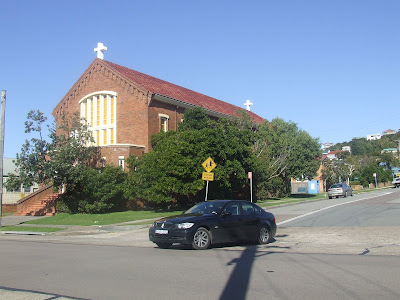 Is it a sign we are keeping well up with the times? Is it the end of religion? The French philosophers are very savvy that way.
This church at Merewether Beach is closing up this weekend and the community will go to neighbouring churches instead. All the local traditions will come to an end.
It is where I was married and there were other family occasions.
Well, it's only bricks and mortar and the style of the building is nothing special.
The writing has been on the wall for some time now and nothing has been done about these changes. There is no pressing need to close these churches except that communities are incapable of taking the initiative and of maintaining their own heritage.
At first, services were held in a hall before the church was built in about the 1960s and the people 'grew' this new building. I believe the clergyman, at that time, was a great rugby supporter hence the Merewether Carlton Rugby Club - now arguable the largest and most successful in Newcastle.
Later on, the old hall was demolished and a trendy school emerged as well as other 'nice' buildings. Here today gone tomorrow. I suppose the church property will be 'developed' now.
Update. The actual closure is on 30 June, my mistake.
Posted by julia at 4:11 pm

Churches come, flourish, and vanish. Old, abandoned, theatres and flop houses are taken over and new churches make them a home for the flocks. It is an interesting migration. And all related to how much money people donated.

A sad piece of history for you I understand...