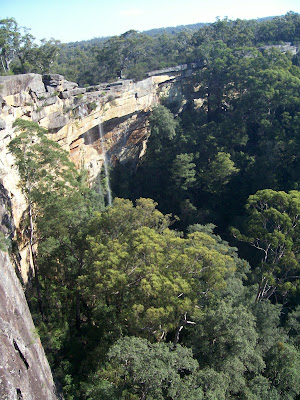 In a secret location in a valley like this one a rare find was made. The Wollemi Pine was discovered in 1994 in an undisturbed wilderness (relatively close to Newcastle) and the tree is described as a living fossil, 90 - 200 million years old. It is being propagated for distribution and sale. Wollemia nobilis.
The tree became extinct with the dinosaurs in the northern hemisphere and declined more slowly in the southern. Fossilised examples had been found. But there is a group of less than 100 living breathing trees, until we grow and plant more of them.
Grows to 40 metres in the wild, one metre trunk. The bark is particularly unusual looking like 'chocolate crackles' and has small leaves, not pine needles. Analysis suggests it is a new genus. 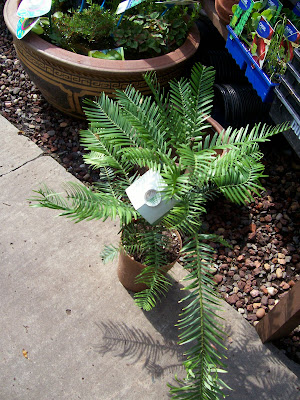 Wollemi Pine ready for planting.
Posted by julia at 12:30 pm

Email ThisBlogThis!Share to TwitterShare to FacebookShare to Pinterest
Labels: flora

the first photograph is impressive. a superb sight

Today before and after the principal place of Martel.
My blog photographs on the town of Martel

Is that the pine then in your bottom photo? If it is you are lucky to have one. Nice photos too and the story behind the photos is even more interesting and reminds me that they have even better visual evidence of the Loc Ness "monster."

Fantastic scenery and fascinating facts ! Yes, I'd heard of the Wollemi Pine. Are you going to plant some in your garden?

That first photo is amazing. I wouldn't want to fall off there.