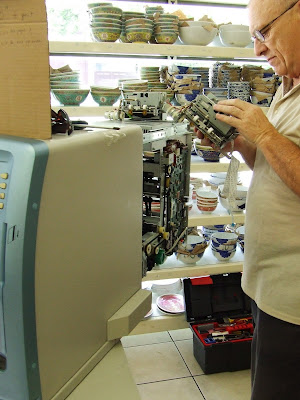 Servicing an ATM this morning. Syncronisity.
How embarrasing! National Australia Bank facilities were out of action today for an hour or so. Again.
Was it from those extra customers among the VIPs that have reached our shores?!  I believe Oprah and co have arrived to tour and film several shows.
Trivia. Well, savings were made when my card was rejected during the meltdown-shutdown. The sales person could not understand the failure so, I left the shop for a jaunt along Westfield's 'grand circut', then down in the lift (elevator), out the doors, into the heat-wave conditions outside, along the footpath (sidewalk), to consult 'witch' bank, instead.
No, there was no problem they said checking my card. No risk of rousing their curiousity about ATM failure. Why didn't I withdraw cash there and then? Was out to challenge the system I suppose.
I retraced my steps back to the retailer only to find my card was rejected again. No sale. And it was a nationwide glitch in the system afterall.  .
Posted by julia at 11:07 pm