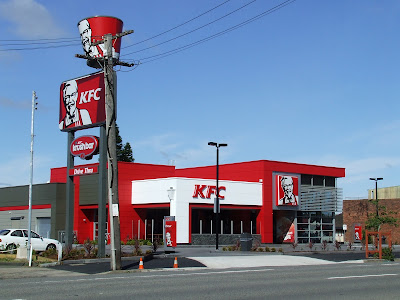 Fast food developments.
High prices in supermarkets must be financing growth in construction of new supermarkets. (Another rant.) A suburb that had only one supermarket soon gets another and next thing, one or two more are planned for a population that has remained fairly stable (in size!). Competition is negated by the duplication of one supermart after another.
The cost of food is increasing faster than it seems it should.  A local MP was supermartket shopping in Mayfield recently and I wonder if she noticed the price tags. Increases are no way incremental but jump by forty or fifty per cent. That goes for rent and food.  At the same time, food is valuable and producers should be rewarded instead of current tactics.
Do prices bear any relation to the costs of production or to the nutritional value? No way. Prices are plucked out of the air. For example it can be seen that the very same batch of vegetables will have a different price tag each day or so and usually the figure goes upwards. 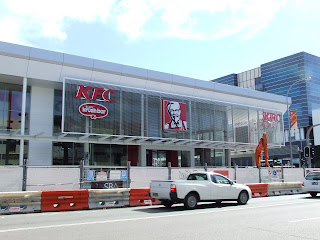 Apart from that, shelves with basic foods have shrunk and contrast with high profit, nutrition-less, gratuitous items occupying loades of space.
For those who are really, really struggling on a low income it is impossible to buy filling, nutritious, economical, basic meals for any length of time from our supermarkets. Old inexpensive stand-bys don't exist. Those male chefs in the ads have a lot to answer for!
Some of our Pacific neighbours literally live on boiled white rice and canned mackeral, (both fully imported and non-traditional), now there's an idea and more healthy in some respects. The 'golden arches' feature items under two dollars as another alternative!
Posted by julia at 8:30 am