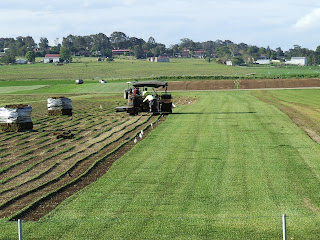 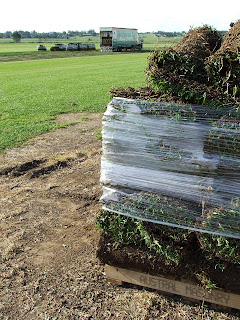 Turf growing and harvesting just out of Maitland.  White ibis-type birds follow the workings. A pallet is ready for transporting. 'Buchanan Turf. Home of Australia's Sir Walter. Always greener. Premium lawn turf' - one of the growers.

To a casual observer like myself, the river plains along the lower Hunter River grow grain crops on a smallish scale, lucerne crops are a given and potatoes were grown, probably along with some other food crops. Overall, this does not look like really intensive food growing - we havn't even begun. There must be a lot of potential for local  'food security'.

I can recall only one large 'hot house' farm - under cover - and it is closer to the central coast. From where does this region get most of its fresh food?
At this stage, instead of food, we can afford to grow turf and build roads and housing on what seems like  land more suitable for food growing - provided enough water is left in the Hunter and the other rivers.
Posted by julia at 2:51 pm