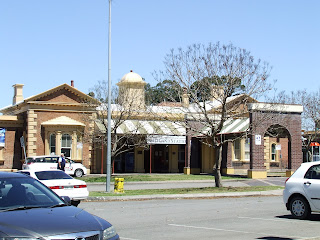 Maitland Station, on the main northern line, is a kilometer or so from the Hunter river but in the past, flood waters have filled a low lying area nearby and the station went under water with possible loss of life. Since then levee banks are designed to protect certain areas.
Update: levee banks existed prior to 1955 flood and went on to be widely improved. A story around the failure of the levee is that stock had crossed it and cut deep tracks that weaken the wall. Mount Pleasant Street area was largely washed away and water rushed on under the Long Bridge, while the other side of town met with other disasters. 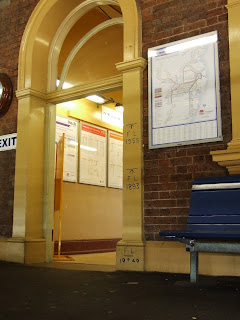 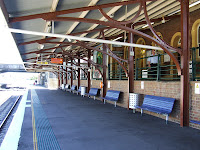 At the station, a door way is marked and shows the flood water levels. The lowest: 1949, next 1893 and the highest mark is for the hugh 1955 flood. The door way is on a stepped-up area above the railway line.
No really big flood has occured since 1955.
Posted by julia at 10:17 am