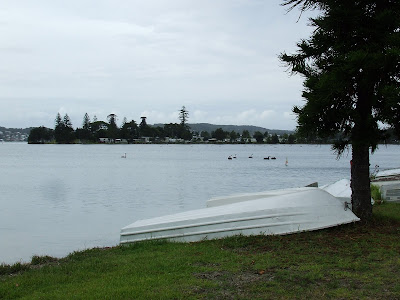 Black Swans are visiting Lake Macquarie these days.
All is not black and white for the Christian calendar has certain idiosyncracies and February 14th has links with Valentine as well as Cyril and Methodius.

Saints Cyril and Methodius were brothers who became missionaries of Christianity among the Slavic peoples a long time ago in the 9th century. Cyril was into the humanities and by and large is credited with devising an alphabet which became the basis for the Cyrillic alphabet used now in Russia and elsewhere. During his ventures he translated the sacred texts to use in the local churches.
The story of Cyril and Methodius involved both the Eastern and the Roman churches and as a result the saints are recognized far and wide.
Posted by julia at 8:29 am