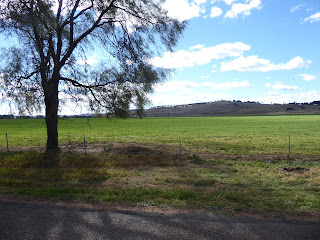 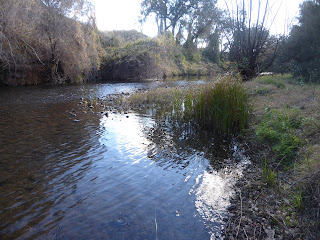 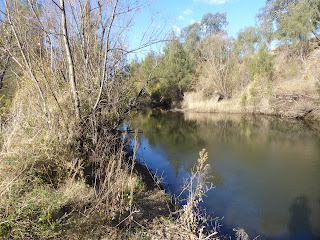 The river between Denman and Singleton flows onwards through brown vegetation in a dry environment except for green patches of irrigated crops where even guards might be an idea to protect the fodder - not that it has come to that. Every spare field by the rivers could be growing fodder during this state wide drought.
I know nothing about farming but notice the haphazard way that stock are fed with grain or hay, the way it is dumped on the ground without any order, perhaps grain could be put on a light weight flat long narrow feeder that could be moved to fresher ground with every feed. Sheep originally came here from greener pastures overseas and are expected to live in extremes such as semi desert where pastures are seemingly invisible and any old ground is good enough prior to their destination and torture during so-called regulated live-shipments to indifferent markets overseas. Stop live export.
At the same time the countryside is full of kangaroos suited to our land and a ready source of meat that needs more exploration.
Most places like stores and clubs are pledging funds from our purchases towards drought relief.
The Commonwealth Bank went totally out of service for some hours - another irriate hacker taking them to task for their daylight robbery??
Posted by julia at 10:50 am

Quite a contrast in these shots.