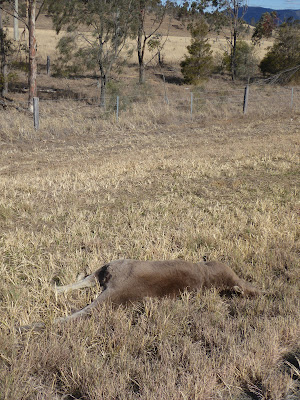 Road Kill.  This is the fate of many kangaroos on Hunter valley roads.
Some say that at night  moisture runs off the roads and waters the grass which the 'roos graze on too close to the traffic.  Roos have virtual paths that they traverse, regardless of highways and used to seek out food and water or so I believe.
It is best to avoid driving at dusk or dawn and largely in between times. Motorists are protected by high fences along sections. Serious car accidents can result from roos. The same with stray cattle. Animal rescue volunteers say to rescue baby roos from the pouch of the injured animals.  I am a so called animal lover but would have difficulties with that move. Killing in a humane manner would be suitable.

End times... we have lost our prime minister who communicated well and behaved in a professional intelligent likeable manner which we could be proud of regardless of his politics,
A dreadful successor is muted as well as a few others. Bring it on. Dreadful is highly suitable so as to aid defeat in the next election. The humour is dark....the party was not conservative enough for the likings of some members!!

Here it's moose and deer that you have to be watchful for in terms of potential roadkill out in the countryside- a collision with one of those can do serious damage.

Our federal conservative party is in opposition (where they belong for a few years until they wake up and stop pandering to the social conservatives) at the moment. One of their biggest members up and quit the party yesterday because he thinks it's not conservative enough.

This in a conservative party that treats Red Tories like lepers.