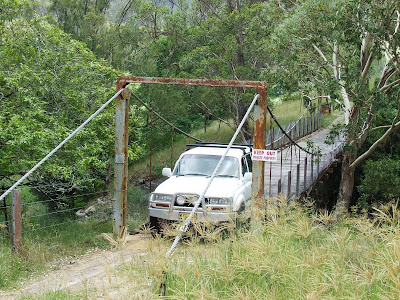 Suspension and balance and a private bridge allows access to a farm.

While the film, The Kings Speech, got my approval and it was rather slow and only about a couple of staid blokes, even so, how is it possible that Black Swan could earn similar approval?
Right, the disturbed delusional serious young woman who starred gave us a few scares and surprises in a contrived string of events but these were often difficult to take seriously.
The core was about ballet. How could a seriously immature ballerina take a leading role in a ballet she was unable to intreprete? Devoid of finer points.
We note the drama of the grand master who aims to tutor a young vunerable - good in theory but all in the week or so before opening night! Unconvincing. And I know very little about ballet. A second rate dancer. Anti-women. Ballet performance of any significance failed to emerged in the movie at all.
Keep trying!
PS The 'dark side' is the important theme but the aforementioned ballet problems are too difficult to overlook.
Posted by julia at 11:05 pm