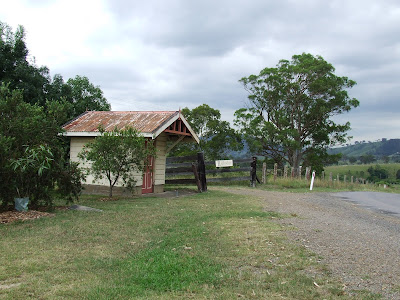 A Creamery, a road side collection point.
In past times, believe cream was produced by those who were a long way out of town and outside the official dairy system. The volume of cream was a manageable quantity as compared to milk. Doh. The farmer seperated milk into cream and low fat milk. The milk was use to raise calves and pigs and the cream was sold, most likely, for butter making.
Nation wide network for fast internet?  In your dreams!  No distance out of town by own standards and even mobile phone coverage ceases to exist. Cow-cockeys must have much better phones that work well in the countryside. It doesn't worry me but it shows up the weaknesses in the system.
We are not very inventive. There would be certain aerials that a local could build as an active point of contact by the community of mobile phones. I guess there is money to be made in keeping non-mobile landlines in use.
Posted by julia at 9:47 am