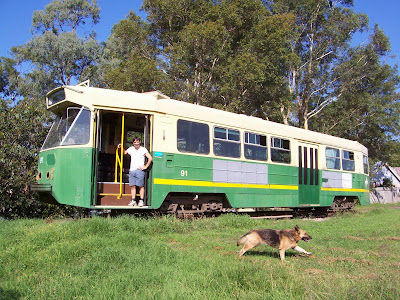 A runaway tram has been captured in a Newcastle suburb to become an abode with a difference.
Cities are becoming massive and there is no way to limit their growth so the focus is on citycentric development which overshadows all the ambitions of the rest of the state to enjoy a share of the action.
Freeways, etags, Metros, public transport, and the Mechano are the daily entertainment. Massive works are so taken for granted and criticised while the demand is insatiable. Along with the special energy of a city true frustrations exist. Who will move out and take off the pressure?
Anyway, this old tram, this asset, could have remained in service instead of being discarded . It was from Melbourne.
Posted by julia at 5:52 am