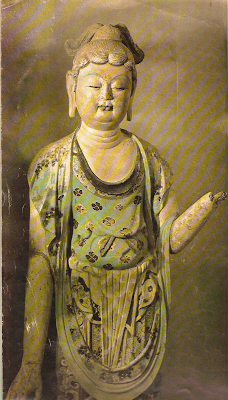 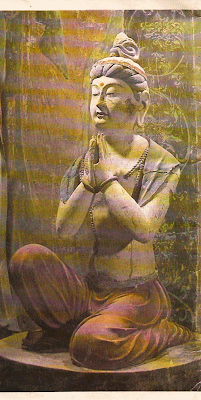 Information about this Chinese art refers to Dunhuang in the Western Region where caves have many examples of ancient grotto art.
The area was the hub of three roads leading to the West and of the Silk Road which resulted in a blend of influences and Chinese Buddhist art reached its apex there in the Tang Dynasty so long ago. A treasure trove of coloured murals were also found there.
The Tang figures are very amiable. The kneeling figure is that of a devotee. Mid-Tang (762-820) and the other is of a bodhisattva also Mid-Tang.
From China Pictorial, Beijing, 1980.
Posted by julia at 4:59 pm