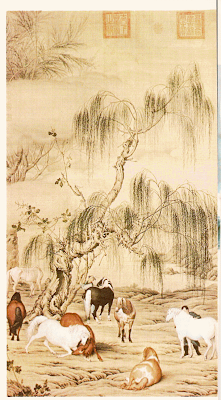 Eight Stallions, a painting by the Jesuit priest Guiseppe Castiglione (1698-1768), who became one of the imperial painters in China and famous for his horse paintings which he signed with the
name Lang Shih-ning.
From an old journal Orientations, Pacific Communications, Hong Kong.
..the horse....speed and perseverance, noted for its proud bearing, its fiery impulsiveness and its intelligence.

Here was a Mediterranean European Jesuit in old China. It is stranger than fiction. I don't think his work has the same flair as the Chinese artists but is a curiosity all the same.

From the article: The Chinese Lunar Calendar follows a 60-year-cycle, in which each year is given a specific name. Each year is denoted by the combination of the five elements (metal, wood, water, fire and soil) and especially devoted to an animal of the 12-animal cycle. ...How this cycle came to be, what animals were chosen, and how, is a little story in itself. It was Buddha who decided, long ago, to summon all the animals of the world and grant them a special gift each. As it turned out, only 12 animals showed up. To each of them, he gave a year to reign so that each year would take on the specific character of the reigning animal. As each animal arrived, so his place was decided in the cycle. They came in this order: rat, buffalo, tiger, hare, dragon, shake, horse, goat, monkey, rooster, dog and pig.

Is there any connection between the spiritual world of a people and the political ideology they live with? It is obscure.
Posted by julia at 9:42 am

Hi Julia! 2008.08.08 is a very special day for Blogtrotter. So, before I start commemorating, let me just tell you how much I appreciate your comments on my blogs! Thanks a lot!
Beautiful drawing! Lovely guitars!
Have a great day and a wonderful weekend!