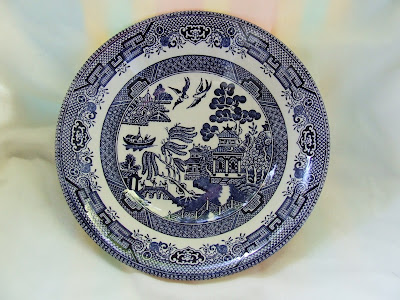 Even the supermarket shelves can take us to another time and place. The Willow Pattern is usually on sale and has immortalized the romantic legend of Koong-see and Chang who end as a pair of doves.
The design originated in England.
It is suggested it is based on a traditional Chinese tale. Other interpretations exist.
Blue and white motifs were usually found in Chinese works and wonderful ceramics have been produced there from ancient times as they have good raw materials (clay etc) and artists and I believe porcelain originated there. Pottery figures from the T'ang Dynasty (618-907) are recalled. The statues of females are very quaint and the figures of horses are outstanding.
Several centuries ago Europeans began collecting Chinese ceramics and started copying the designs and techniques! The Willow Pattern would have been all the fashion, I suppose.
The delightful blue and white Delft china of the Netherlands was another result. Trade and The East India company was influential in that regard. (This is not forgetting other contact between India, the Middle East and Central Asia and China began long before the 1700s. Even a fabled journey in the Arabian Nights was between Bagdad and China.
Posted by julia at 12:38 pm

Thank you for visiting my blog and for commenting there.

I knew something about the willow pattern on china but not as much information as that which you posted today. Your post has been interesting to read.

One of my friends has this pattern EVERYWHERE in her house! She just LOVES it! I emailed her your blog because she couldn't believe that you had it on here!