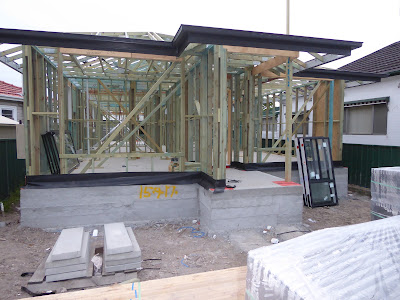 Building a house.  Three weeks later, 10 Oct 2017 and the frame is done.
The house is relatively high off the ground.  More recently, the whole city had the flood zones mapped which regulate how high the ground floor must be off the ground.
The zones are estimates as flooding has not necessarily been recorded in some areas. Several years ago a number of suburbs were flooded in a major storm the likes of which cannot be recalled in our time. Regulations exist about coping with a flood even a large kitchen bench legally acting as a safety zone it has been said.
Posted by julia at 9:27 am

That was fast compared to your last post, but still work to be done.