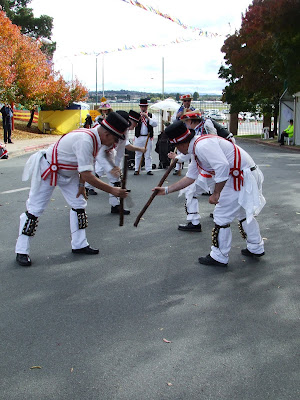 These are no waring tribesmen but exponents of traditional dance from the UK and celebrating at a festival.
Osama was far from the mind of festival goers  but one well known entertainer sang about current warfare and its futility and in a well meaning rendition frequently alluded to the Islamic deity and to Jesus.
I am sceptical about political correctness but I wondered  if the lyrics and reference to the Islamic deity were against tradition. The audience were probably all WASPs.  All is fair game at a festival. And will the Chasers parody the current events in Pakistan?
Posted by julia at 10:01 am