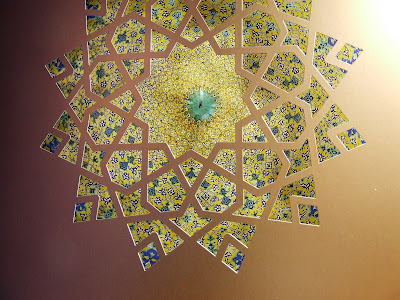 An illustration from the book Saraban A chef's journey through Persia, Greg and Lucy Malouf.  Each  'surah' with a decorative cut-out through which to glimps highly ornamental images as well as scenes from Iran and the people and food.
Newcastle folk in Ellamorevale have debated at length an application to build a Mosque and raised objections about traffic problems and the debate just reached an important point at a time which conincides with the revisiting of extremists actions from the past, overseas.  Newcastle is not very multicultural in an obvious sort of way. Apart from the need for actions based on justice and good will, by and large, a multicultural presence is good for a community.
A farce has taken place in Pakistan as contradictory stories come out.  All's fair in love and war. How embarrasing for Obama and co.  Governments have gone insane. I'm ashamed. And the unsavoury Pacific solution for refugees is included in this rant. Also, where ever does the pronounciation come from that sounds like Muzzlems instead of Mooslems.  I wonder if those US daily shows, that don't reach here anymore, are giving the government heaps.
Posted by julia at 10:54 am