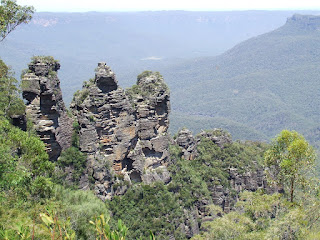 Charles Darwin visited these Blue Mountains, west of Sydney, according to a program on ABC Radio National. At that time he heard theories that these inspiring gorges were the result of erosion some 180 million years ago. After the sightseeing he sailed away on the good ship Beagle to see more of the country and he turned 27 in Hobart. Darwin's commemorative year has begun this 2009.
Our beliefs are full of contradictions. Evolution or creationism? A priority could well be a belief in non-violence in real life in the here and now and a stand against over-the-top violence in blockbuster movies.
Posted by julia at 11:40 am

Interesting thoughts to accompany such a beautiful view.