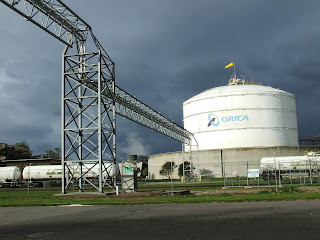 Another storm over the Orica works
Koorangang Island is home to an array of large industrial undertakings. A fertilizer company took up the first lease on the Island in 1964 and was probably Greenleaf Fertilizer hence Greenleaf Road. Or was that Incitec who merged with Pivot who may include Orica or is it Hi Fert?  No, Orica is Orica and originated as ICI - so it has quite a past.
An old hand spoke of an incident of airborne pollution in the very early days that damaged the paint on the cars belonging to the workers who were given compensation payments. There was no Stockton Bridge or transport. Still no transport?  Then the 'smoke stack' was lengthened because of a persistent inversion over the area.  Over forty years on and problems continue to occur.
And the company creates the pollution.  Not the government.
Posted by julia at 10:47 pm

The history of Kooragang is long and interesting. Things were very different back then.

I love the blog, great to see Newcastle people blogging. I love seeing posts about my local area.