Parliament House displays a whole wall of large panels: Six River Odyssey.  In vain.  Green wash.  That's all it is.
Many of the politicians therein are incapable of a noble decision. Anti environment. Water - Water minister!!

Dedicated heros work to prolong the life of the Murray Darling Rivers while others ignore all the science and work in opposition.
The overall picture is of most importance and those who suffer up stream could restructure with assistance.
Deals are broken and South Australia, a small threatened but competent state, has been doubled crossed.

From Hindmarsh Island, S A -  the ultimate mouth of the Murray River, in the distant centre is the outlet to the open sea and a dredge or two are in situ, this October. Water was less scarce at the time. 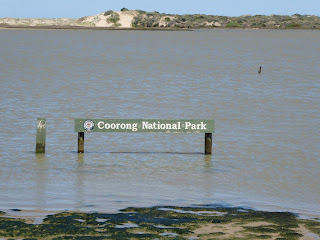 Coorong National Park in its beauty was the setting for the classic nature tale Storm Boy by Colin Thiele which was also made into a film.  And it has an indigenous aspect.
The National Film and Sound Archives is currently featuring an on line revival of this significant film.
See nfsa.gov.au