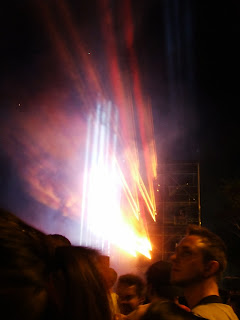 Imagine the distress when your school child is prevented by bushfire from returning home after school and not knowing their whereabouts.  And groups of people seeking shelter from the flames.  Then finding they have lost everything to fire. As has just happened.

In poor taste and ill timed I suggest that similar but hugh problems are the experience of thousand of refugees and those living under attack in Syria. In addition food and all supplies are scarce in the towns and little children have malnutrition. Whatever is their government thinking?  It must be full of sadists and or psychopaths.
The ABC Radio relief appeal for Syria is on Sunday. Between 12md and 3pm we will be reminded to donate to the charities that work among the thousands who have next to nothing in Syria.
http://www.abc.net.au/appeals/
Posted by julia at 11:22 pm

Good for you for promoting the refugee plight - I can only imagine how crap it must be to be moving around with nothing but the clothes on your back.