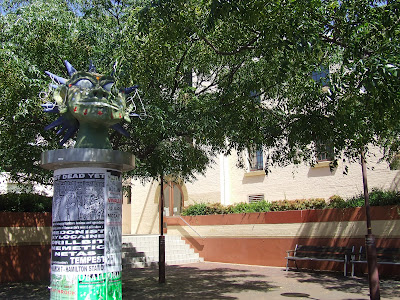 Outside the building formely known as the Regional Museum. Prior to that it was a brewery.
Gen xyz wonder about my pronunciation of the word brewery.
Maybe the crowds from the boutique brewery on the harbourside say things differently which is quite understandable ! 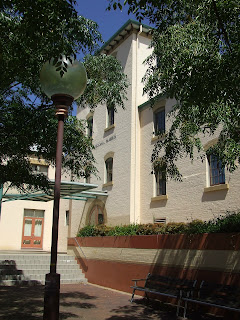 We were very pleased with ourselves as a city, when this regional museum, as a first, opened in the late eighties. At least we're flexible. The museum will move and open again next year in Honeysuckle.

The museum was initially opened by Queen Elizabeth amid officials and crowds. The capital funding for the project was from the City Council and the Bicentennial Council of State Government. 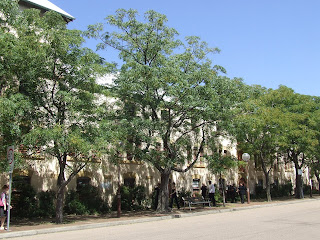 Wood Street in the eighties. The trees have grown well since then. The TAFE college is at the far end. Was this before the venerable Australian Broadcasting Commission offices existed at the end of the street? Their building first opened as a restaurant or somesuch. The WEA/Temple bookshop was on the right then.
Posted by julia at 10:59 am

How very interesting. I like to hear the history of an area. And of course of the ever-moving museum.
Thanks for visiting my blog. You asked what city. Stanwood, Wa. Small farming community. MB

OOPS! You asked where's the city. Well, right around the corner. lol MB

From brewery to museum, nice itinerary... ;))
I'm a fish eater; so I'll take whatever you offer... Thanks!
Gil