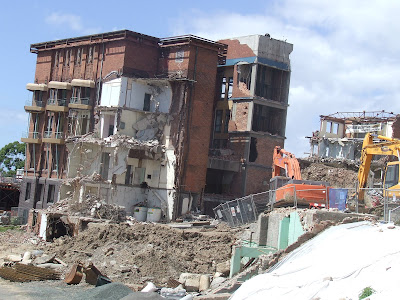 The Mater Hospital, Waratah will be rebuilt. Oh! I'm forgetting its new name: CalveryMater. The balconies on the end had been notable additions. Not. Also, the building dosen't really have a lean to it. 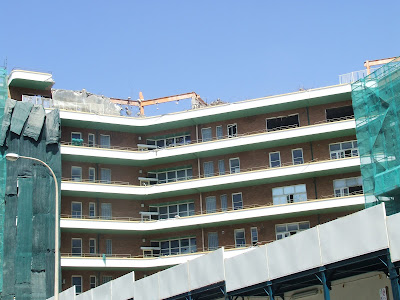 More demolition this time at Newcastle hospital from the top down. Labour ward has vanished. Labour ward in the days when the hospital was built would have been a different story to that of todays. For a start the Mother was forsaken and left on her own without a support person. Equipment would have been minimal. Intensive care cribs probably didn't exist. Shaving and other strange things were de rigueur. Soft furnishings - no way. Spa bath?
Later, this hospital was quite innovative in that the babes (ignore recent connotations) spent most of the time with the mother rather than in a central nursery - this was no time for rest and recovery! But not at visitng time when newborns were shephered into the viewing nursery behind the glass. To seek early return home after a few days was considered outrageous. A seven day stay was not unusual.
The Mater at Waratah was probably the hospital of choice based on the old fashioned idea that new mothers were delicate beings in need of care, freed of the babe to some extend. What luxury, how could they spoil the challenge in that manner? Another fashionable hospital in Sydney liked to see the new parents have an evening out alone before the mother returned home again.
Ultra sounds and scans were unknown. Certain worrying conditions in expectant mothers don't appear to be monitored nowdays, hope these have resolved themselves by magic.
Despite the high tech approach, childbirth still remains the same unrelenting labour of love and dare I say, drama and with an element of risk.
Round 3am, in relative peace, in the presence of a confident midwife, to watch her bathe and dresse a healthy delivered newborn, is an unforgetable little ritual.
Posted by julia at 8:24 pm