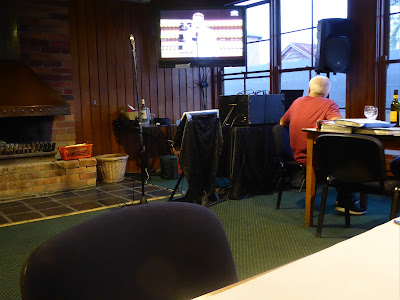 Karaoke gave way to the league Grand Final with rapper Maclemore beamed into every corner of our parallel universe and Same Love was heard without a reaction in the country pub before it all became more hectic as the evening got underway.
The tables filled, wifi pagers blinked, eating began, rowdy children came indoors from a grassy space with a big tree to climb, a few hopeful dogs prowled through, several bikies called in, two police arrived for a meal break their divvy van out front, the TV got drowned out, a local apple cider with a kick was enjoyable, the match itself so so.
Ours was a secure evening with a sense of ease, the rapper and his culture to be pitied and almost rejected, an urgent lesson for us to learn.
Posted by julia at 6:16 am

I'm completely oblivious to such a rapper.