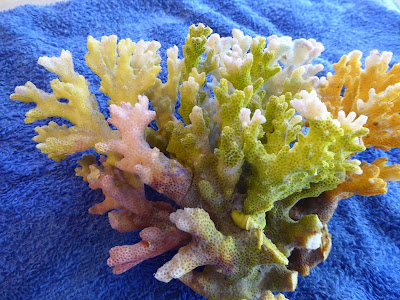 'UNESCO' and 'endangered' hovers over the coral reefs of Queensland.  The ocean has warmed up and as a consequence, disastrously, colour has drained out of areas of coral. Cycles of recovery occur but are predicted to be less likely with increased global warming.
The minister to do with global warming wants to rest on his laurels. Can't we do better than his reasoning that if the coal mines (in Queensland) are not developed than another country such as Indonesia will produce more coal of a type that is more polluting.
Saving the wonders of the reef and reduction of carbon pollution comes at a cost. There is a price to pay in money and jobs.

The coral in the photo is a rather old souvenir that was found by chance in Newcastle. It is more colourful than the image and surely it is the natural colour.  Although I have been to the reef area I never saw the coral except for a bit of snorkeling where coral was not a big feature but the island was lovely.