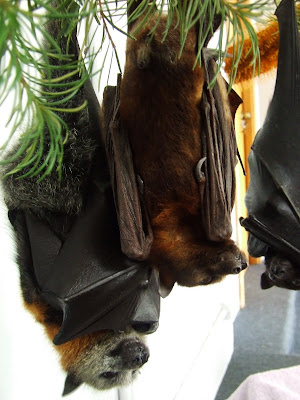 The Flying Fox hangs by one leg and wraps itself tight in its 'wings'. The small fruit bat was cold and tried to hang close to the other but was rejected creating typical squawks. Unexpectedly those little beady eyes won me over. The soft wings are unique.

These fruit bats were in the care of native animal rescue who report that bat food is scarce at this time of the year.  They feed preferably on native fruit and flowers while another group might eat insects and small animals and birds. These little bats often seek out a home-base in our urban areas and their habits are not necessarily well tolerated. At dusk they flock over our suburb. They are the only mammals that fly.
The carers are not anxious about disease from the animals and risks are minimised. Long term survival of certain species of flying foxes is unlikely according to the rescurers.
Biodiversity - where will we be without it!
Posted by julia at 10:29 am

They sure are a strange animal, but I think they're numbers are increasing annually. Twenty years ago I never saw any bats, now they're plentiful around our area.