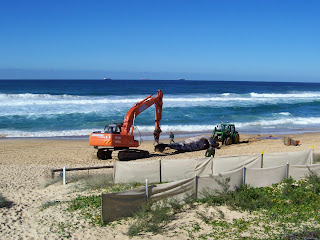 Another crane. Even while beach fishing, men need a crane!
From the archives, is an old photo, back in August 2008, when a dead whale washed ashore and had to be buried in the sand. Zooming in was unsightly.  Last night the same thing happened again on the same stretch of beach and was buried before I got a photo.

In 2008, the cause of death was unknown and samples were taken. The whale had signs of injury caused a ship's prop and could have occured when it was already dead.
Posted by julia at 10:57 am

Beautiful ocean shot. That's too bad about the whale. Any idea why it died or what kind it was?