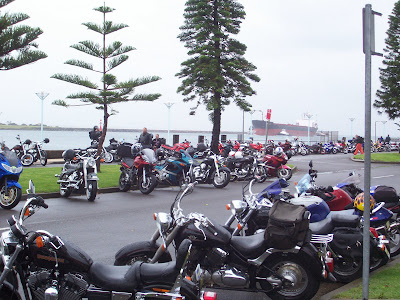 Photo of an earlier Toy Run bearing gifts for the children of Newcastle .
Thinking of choppers, what was the destination for the bikies in Easy Rider? The Mardi Gras in New Orleans...where they wander the parade filled streets only to find their triumph is subverted.
Mardi Gras Day is really on Tuesday, variously known as Shrove, Pancake or Fat Tuesday, the celebration before Lent, forty-six days before Easter.

Easy Rider has been deemed a significant film, a window on the 60's, of hippie counterculture and of red necks. This home-made, aging, anti-extravagant film is about two non-conformists who believe in goodness and ride customised Californian choppers searching for the 'real'. Often 'stoned' they roll on a journey of discovery eastward from LA to meet their show-down and the price they pay for being different.
To rehash more from Imdb.com: Dennis Hopper won best new director. The cinematography is praised and so is the music, one of the first movies to use previously recorded musical tracks: Born To Be Wild etc.
Jack Nicholson (as a lawyer) got a nomination, thankfully, at a time when he doubted his acting career.
Captain America (Fonda) is said to have been an experinced motorcyclist hence his chopper is more extreme than that of Dennis Hopper who was less experienced. Four police bikes were customised for the film, one was burned during filming and the other three were stolen, no less, before the end of the filming.
As a passenger, Nicholson broke Fonda's rib in the process of trying to balance himself because the chopper was so 'squirrely'.
Is this film a cult-classic with its share of excitement, edginess and risk?
Yet there's more. The Carnaval in Rio is the backdrop for another ancient yet different film, Black Orpheus, filled with jubilation and malevolence and original Latino music.
Posted by julia at 8:02 am

I don't recall any bikes in Black Orpheus. Perhaps you are confusing that admittedly fine film with another, Jean Cockteau's Orphee, in which his death figure, clad in leathers, rides a motorcycle. One of my favorite films.

Orphee: thanks for suggesting another a good movie.
The connection between the two was the Mardi Gras.