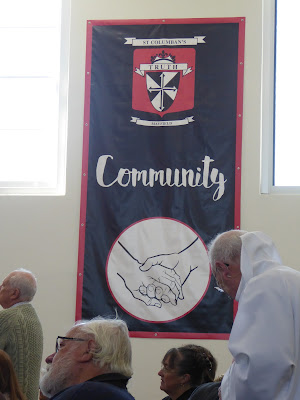 Motto: Truth / Veritas
Parody (clumsy) of Daily Telegraph columnists on Yes/No voters behaviour and SSM  - more of the same for this blog.

Frequently it is observed that many climate change campaigners are the bullies and bigots they claim to oppose. No, that claim belongs to the deniers.  Tim Flannery uses his scientific credentials of wide renown to relate the latest news of environmental issues. His fellow scientists who worked for official organisations have been released from their roles in climate studies by the federal government who acted in a shortsighted manner. These were regular workers not crooks or criminals. But their  gallant efforts to inform the nation is usually strongly countered by the newspaper columnists of the Daily Telegraph.
Tim Flannery has a passion for the Australian environment and understands the consequences of our lifestyle.  His 'crime' is to have our future at heart. Environmentalists are subjected to strong criticism and put on a par with criminals by columnists who have no credentials in science and who act as true bigots by spreading disinformation far and wide to stimulate an army of intolerant readers.
Who are the real villains?  Is it the green activists who use a tiny bit of power to support environment issues without use of violence or personal attack.  The big names should pick on someone their own size.
The real villains are those who manipulate information and print bigoted headlines and use their power to raise conflict.  The real bullies are those who have no well-formed considered doubts and put the future of our planet at risk.  They must drown-out all common sense notions and abuse the modest efforts of reasonable people. Support for the big end of town must be behind the commentary misrepresenting itself to the average  reader.
Are the real bigots those columnists who do not produce a balanced opinion piece and rely on sick, outdated, backward opinion to exploit and use shock tactics to keep sales afloat safe in a conservative media company of the Murdoch clan.  Right wing friends in the back benches or right wing Optus Dei members may be there in the background.  To some of which, the environmentalist Pope must be like a red rag to a bull when he gets a hearing.

The blindness of the right wing these days just makes me shake my head.