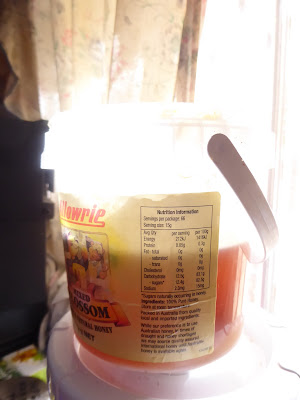 Believe honey remains edible forever.  I gave this Allowrie Mixed Blossom Honey to family, the honey, dated July 2016, candied and sat in a cupboard so I recently asked to take it back and use it up. Sweet. How many Bees did it take to produce a kilo? Really it is a sugar, even sweeter than sugar cane.

Yesterday as a first for this season was heard the monotonous repetitious call of a certain bird that can get a mention in the media in spring.
CLIMATE  Our winter had temperatures and a lack of rain that broke the records.  Same with rainfall in the flooded region in the US and the recent hurricanes where more records were broken.
That we have politicians that are climate deniers is staggering.
What is the nexus between conservatism, climate change denial, dead set against renewable energy, taking exercise, wearing budgie smugglers, Opus Die profile, vote no and messianic political pretencions?  Haven't they heard their Pope is outspoken in support of action against Climate change. What does it take?
The nexus must be MONEY and more money.  No matter what, profits must be made from fossil fuels -the  oil and coal; profits from plundering the seas and marine parks; from excesses rather than sustainable processes and despite the hidden subsidies. Global profits are high stakes. No one can stand in the way.
Posted by julia at 8:45 am

I would consider myself conservative in politics, but the sad fact is that the hyper partisan, ultra vindictive state of conservatism as it stands today, even in my own country, has left me disgusted with conservatism.