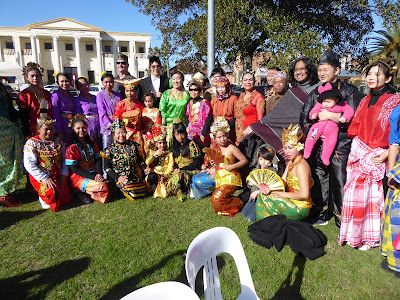 Tradition Indonesian dress has splendid variety seen at a multicultural event recently.
'Let the person who is without blame cast the first stone' - all the same, here goes.  In overseas media it is noticed how tiny casual racists remarks are often thrown in, Europeans often the target or the war years, as well we hear colonial attitudes expressed.
The Good Karma Hospital is not quite entirely free of that.
In contrast, the gripping drama, Indian Summer (shown on ABC TV) when attitudes and class of some years ago were at their peak leaving the viewer anguished.
There is an expectation around here that newcomers will become one of 'us' we hear said. No one's perfect, how often the typical 'quaint' expat is always seen associating with other expats.
When we see community development in the Australian Indigenous context more often than not it is led by a non-indigenous person, true opportunity needs to be further extended.
Posted by julia at 10:36 pm

There is much work still to be done.