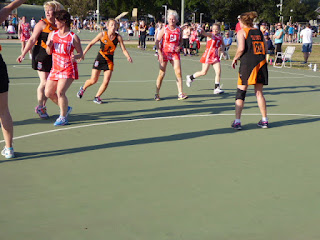 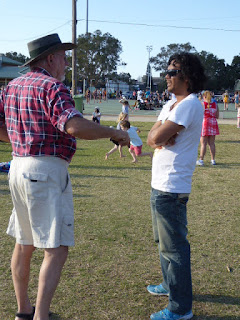 Red check patterns on and off the court.
Red check made a political statement in Indonesia this year but Ahok and his supporters did not do well and he has been found guilty of blasphemy and gaoled.
A similar charge of blasphemy and a three year sentence to Cipinang gaol was made against a journalist, Atmowiloto, several years ago and there may have been other convictions.
Thus, factions have been active for some time and a move, however slowly, towards establishment of a stronger religious state is observed in Indonesia.
It is the age of rediscovery of identity and of what a true religious believer should be.  It is also an age of secularism and of pluralism.  Some resort to conservatism and a return to the tried and true and resist change.
One small indication possibly of the rise of nationalism is seen in early photos where once Indonesian women did not necessarily cover their heads with a scarf. .
On one hand leaders make charges to safeguard their religion from a breech of etiquette but a sense of proportion is appropriate in a justice system where very big crimes against society would be to the fore, for instance, crimes that indirectly burden the well-being of the average person and hold back their standard of living which is not high.
The kingdom of heaven or a religious state ideally is all about the here and now and, without too much difficulty, seen as life-giving giving priority to true justice for all -  materially spiritually and politically.
Posted by julia at 10:55 am

Admittedly this does not make the news here.