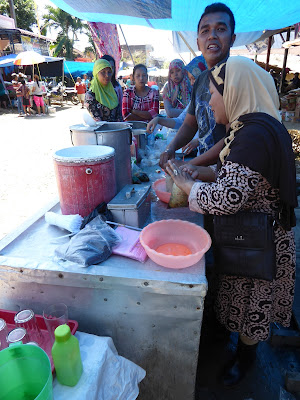 Pasar....drinks. Below: sugar cane crusher machine possibly to make fresh syrup for drinks. It goes well with ice and has been enjoyed in an infrequent purchase that breaks all the tourist rules.
Is the drink, Jamu, Indonesia's secret weapon?  It offers a lot of well-being. As a popular herbal drink prepared according to traditional recipes it is probably intended to be a 'safe' healthy tonic. Alcohol is proscribed by the majority religion.
The flavour of Jamu was resonable enough when sampled from a batch prepared by a small home based enterprise. An acquired taste, it covers all health problems. Far better bet than so called energy drinks.

Tourists would hope that Indonesia does not become 'blacklisted' by the land of the free.  Apart from strife for the Indonesians, tourists who flock to Bali might find that it stands in the way of subsequent plans to visit the USA if they are keen enough to visit there.
Possibly, Indonesians are not on the move to America and less likely to be targeted.  It is just as well that Saudi is not on the banned list as far as Mecca is concerned and if American non-citizens go on the Hajj. 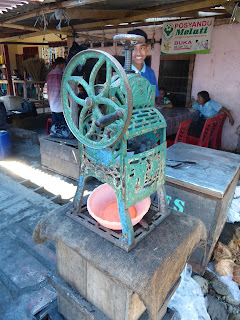