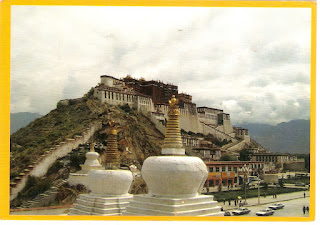 A postcard arrived from Tibet which is another place of great altitude.  Visitors are immersed into Buddhism, stupas and lamaseries.
It's possible to slake wanderlust with several epic films that depict parts of the Himalaya region.  Fascinating insights abound whether or not there is authenticity in these stories.
Kundun from Scorsese has a Dalai Lama theme with mysticism and edgy rituals. Amazing.
Seven Years in Tibet with Brad.
Little Budda.  Bhutan on show, from memory.
Lost Horizon 1937 directed by Capra is a classic film of Shangri La. Seen possibly on late night movies in fearless black and white.
Other subtitled movies and docos have other revelations.
These are hugh and curious movies, but, if anything, imparted some negative feelings around that belief system, never the less, it still holds my political sympathy and interest.
Posted by julia at 1:33 pm

Email ThisBlogThis!Share to TwitterShare to FacebookShare to Pinterest
Labels: culture