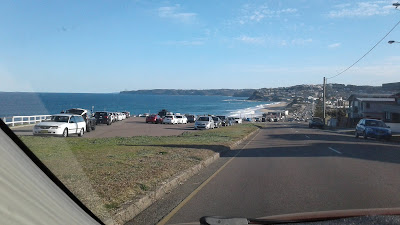 This route past the beaches is sure to please us.

A total turnaround has happened to local media and has been rapid. Newsagents were a sought after thriving business - not any longer, lottery sales seem their mainstay in those that remain in business.
Just the other day as they say there was a rally in the city to support the local Fairfax newspaper from outsourcing important tasks - now there has been a sell out to Sydney's brash Channel 9 and doubts about the future of a whole network of country newspapers.
In a relativly short period newspapers have had their day.  A local state of the art printing press of  fairly recent times has ceased printing the local rag and jobs have been lost - didn't management  see the writing on the wall?
Posted by julia at 12:13 pm

Some of the same processes are going on here- the closing of smaller papers, more articles from various news services as opposed to more reporters.