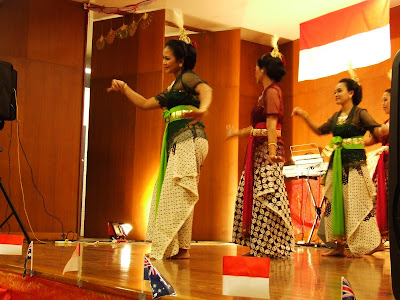 The Ambassador of Indonesia; the Lord Mayor; other officials and wives attended the Indonesian Independence Day Dinner and entertainment. Impromptu, the Ambassador sang old 'tops of the pop' numbers on stage and played guitar.
Traditional food was served and alcohol was conspicuous by its absence, at the same time, in other respects, this was not a crowd of wowsers. Indonesia is a northern neighbour. Extraordinary how a European power arrived there once and 'took over' a country of such antiquity. They brought missionary activity and built churches. Nowdays, the 'boot is on the other foot' when the Europeans get worried about newcomers to their country.
Fascinating to watch what citizens take exception to. Unsavoury celebs and the gospel from Oprah or Dr Phil are given the thumbs up. Fears arise from selective changes in our society.

Quite beautiful photography and lighting.

That is beautiful. At first sight I thought it was a fashion show.