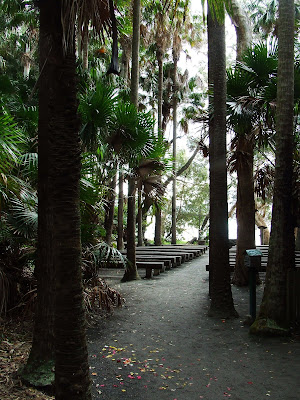 The Green Cathedral. With traces of strewn rose petals. A sacred space beautifully set among the tall trees with a vista beyond the altar to the lake.
Survivor comes to mind and after all, this cathedral is touted as a Wedding venue! Or imagine flaming torches illuminating strange midnight rituals.
This setting is at Tiona and was founded in 1923 and the story relates to the Mormon Faith.
Joseph Smith, the founder of the Mormons (USA) has direct descendents living north of Newcastle in Tuncurry-Foster. The great-great grandson and 300 direct descendents are in Australia (and have been described on Radio National interview).
In the early days of white settlement their forefathers built a church at Tuncurry and at Tiona a sacred place beside the Wallis Lakes in an unusual palm grove where church reunions and children's camps would gather.
(Nowdays the nice busy Camping and Caravan Park, surrounding the Green Cathedral, is a business that retains no links with church. Several buildings from the early days remain there.)
The local descendents are not united with the church in Utah and have moved into offshoots of the faith. Family and genealogy are very significant to the Church of Jesus Christ of the Latter Day Saints (Mormons) in Utah and hence they see the descendents as important and have notions of a Holy Grail bloodline which is revealed in more detail on Radio National (ABC) programs at these sites here and here.
Many people are probably entertained by the story Big Love, from HBO, on SBS TV, if they can suspend their disbelief in this far fetched tale of polygamy, which is very well cast (although is still well bested by Angels in America). The Mormon church (Utah) has distanced itself from the show and renounced polygamy over a century ago. 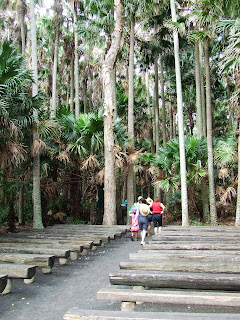 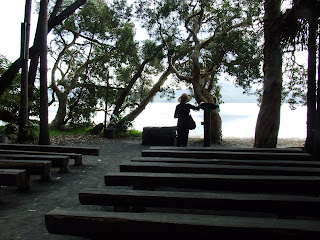 Well, religion aside, this is a very beautiful site for sure. Nice photos!